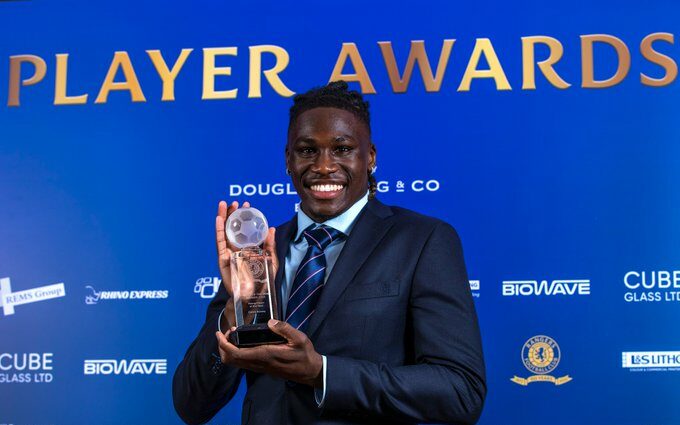 Super Eagles defender, Calvin Bassey, is reeling with excitement having been voted as the Young Player of the Year at his Scottish club Rangers.

Bassey, who was voted ahead of other contemporaries at Sunday’s award ceremony, said the feeling is amazing and encouraging.

“It’s an amazing feeling, especially on the club’s 150th anniversary. It’s just amazing to win this award and all the hard work I’ve put in over the past year recognized.” Bassey told Rangers TV.

He went further to appreciate the effort of his teammates, manager and fans in pushing him to go all the way

“It has been amazing, all credit to the team, fans and manager for trusting and believing in me.

“My teammates push me every single day so it’s not just for me but for everyone there working hard with me.

Bassey more than anything else sees the recognition as an encouragement to remain focused on the business end of the season as the team is still in contention for titles on three fronts.

“This is the part of the season where the rewards are given. You know we are still in the league, Scottish Cup and Europa League so there’s a lot to play for and we’re just focused on taking each stage as it comes to get better and be prepared for the challenges ahead,” Bassey said.

.Bassey is the second Nigerian to win the award in four years as Joseph Aribo won It in the 2019/20 season.

Since displacing Barisic on the left side of the defence with his all-around displays, Bassey has over 40 appearances for Rangers in the season under review.

The consistency in his performance earned him a place in the Super Eagles when he won his first two caps for Nigeria in the ill-fated FIFA 2022 World Cup playoff vs Ghana in Kumasi and Abuja respectively.

The 22-all-rounds enjoying a breakout season with Rangers and would hope to finish on a high in the Europa League and the Scottish FA Cup where his team has fairly good chances of winning the top prizes.