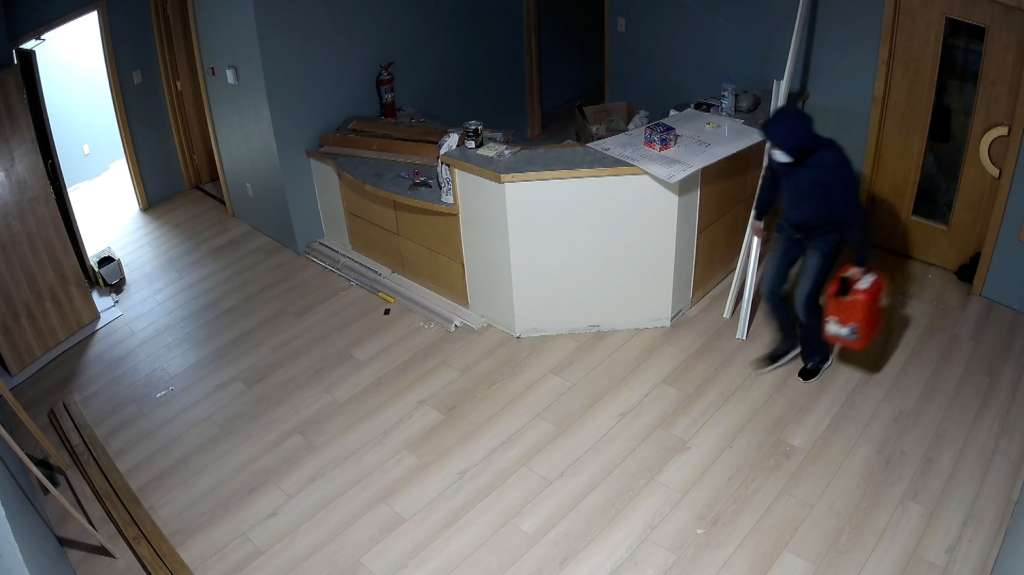 (CNN) — Local and federal authorities are searching for a suspect who they believe intentionally set fire to an abortion clinic set to open in Casper, Wyoming, later this month.

The suspected arson took place in the early morning hours of May 25, according to a news release from the Casper Police Department.

Surveillance video from inside the Wellspring Health Access clinic shows the suspect, whose face is covered with a surgical mask most of the time, carrying a red gas canister. Police released the footage earlier this week.

When police responded to the business shortly after the suspect was caught on video, they found a broken window and saw a fire, according to the police news release.

Authorities believe the suspect is a white female and acted alone, according to the news release.

The Denver field division of the Bureau of Alcohol, Tobacco, Firearms and Explosives (ATF) is offering a $5,000 reward to anyone who provides information leading to the suspect’s arrest, police said. Authorities are also working with the FBI, police said.

The clinic was set to open in mid-June, but the open date has now been pushed back for months.

“We’re still working with our contractors and insurance adjuster to determine the full extent and cost of the damages. At this point, we’re anticipating that the clinic opening will be delayed by around six months,” Julie Burkhart, president and founder of the Wellspring Health Access told CNN in a statement on Friday.

“Despite these setbacks, we are undeterred in our mission to give the people of Casper access to comprehensive reproductive health care, including abortion care,” Burkhart added.

The clinic in Casper is “strategically located so that people in areas of low access states such as western Nebraska, western South Dakota, and the southeastern corner of Montana will be able to more easily access health care services,” according to the clinic’s website.

Casper, a city of nearly 60,000 residents, is in the central part of the state.

When it does open, the clinic is expected to become the only clinic offering both medication and surgical abortions in the state of Wyoming, according to Wellspring Health Access.

Currently, the sole abortion provider in the state, Women’s Health and Family Care in Jackson, Wyoming, only provides medication abortions for pregnancies under 10 weeks, the clinic said.

Wyoming is among a handful of other states that have passed “trigger laws,” which are bans designed to go into effect if Roe v. Wade is overturned. The 1973 court decision affirmed the right to receive an abortion under the 14th Amendment, ruling abortions were constitutionally protected up until about 23 weeks when a fetus could be able to live outside the womb.

Signed into law earlier this year, Wyoming’s bill added a provision which would make it illegal to perform an abortion if Roe is overturned, with extremely limited exceptions for cases of sexual assault, incest, or the risk of death or severe injury to the person giving birth.