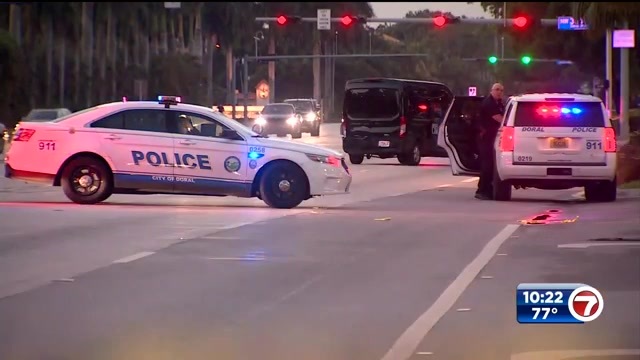 DORAL, FLA. (WSVN) – The search is on for a hit-and-run driver after, police and witnesses said, a woman was struck near a Doral intersection, and a man was dragged for at least one block.

Dramatic cellphone video captured the moments after the crash near the intersection of Northwest 36th Street and 87th Avenue, Saturday night.

Michael Skinner, the eyewitness who recorded the video, said he saw the whole thing play out.

“The car that hit them took off,” he said.

Skinner said the victims were driving a black van near the intersection when a car rear-ended them.

“People getting out of their cars, people screaming. I originally thought someone got run over,” he said.

According to Doral Police, the other vehicle was a rental white Ford Fusion.

“It seems like a car was struck, and the people tried to get out of the car to see the damage, and the car that hit them took off,” he said. “It looks like they hit the woman that was driving the car.”

At some point, Skinner said, a passenger got out of the vehicle that struck the woman.

“The passenger who got out of the car also tried to stop the commotion, grabbed the car, and the car took off down the street and dragged the guy many, many blocks,” he said.

Police said the man was dragged for one block.

First responders treated the injured man at the scene.

Paramedics transported the woman who was struck to HCA Florida Kendall Hospital as a trauma alert. She is listed in serious condition.

Police said the Fusion that fled the scene has the tag JKKC16.

As of 11 p.m., the intersection remained closed off, and a tow truck had arrived to tow away the van.

If you have any information on this hit-and-run or the whereabouts of the driver of the Fusion, call Doral Police or Miami-Dade Crime Stoppers at 305-471-TIPS. Remember, you can always remain anonymous, and you may be eligible for a reward of up to $5,000.

Copyright 2022 Sunbeam Television Corp. All rights reserved. This material may not be published, broadcast, rewritten or redistributed.