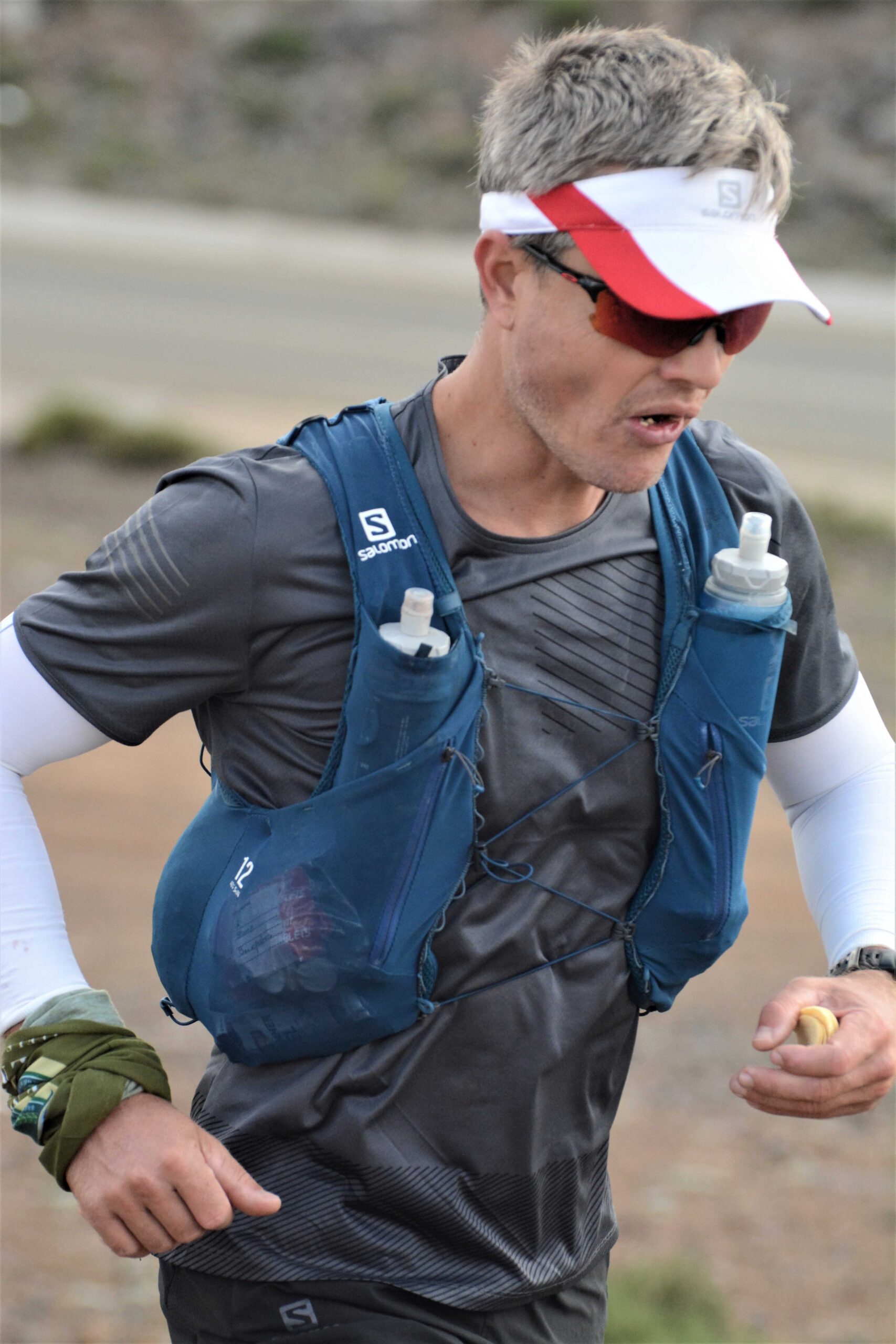 At the same time as South African distance running legend, Ryan Sandes, was engaged in his own mountain adventure close to the UTD action, circumnavigating the Mountain Kingdom of Lesotho with his partner-in-adventure, Ryno Griesel, relative newcomer to the trail running scene, Pickard, bested his UTD160 record.

Last year’s first and second finishers, Amri Williamson and Jo Keppler, again bagged the top two places in the women’s competition, but this year the two friends and rivals crossed the line together in 27 hrs 41 min 30 sec – over an hour inside Williamson’s 2021 winning time.

Pickard’s 22 hrs 02 min 56 seconds improved Sandes’ 2021 time by no less than 27 minutes 42 seconds, crossing the finish line forty minutes ahead of Tshabalala after completing 160 km of challenging trails by day and night in Lesotho, at altitudes above 3000m, and down in South Africa on equally testing single-track trails.

“That was next level – far more challenging and exhausting than anything I’ve ever done,” admitted former adventure racer and transportation logistics manager, Pickard. “That was some contest. I could see I was starting to close the gap on Simon at each of the aid stations after the 100km mark and that gave me the incentive to push even harder. Then running with Simon in the final quarter was so intense until finally I managed to break clear on a climb from Drakensberg Gardens.”

Spare a thought for Gauteng athlete, Tshabalala, who has proved unbeatable over 100km but, like Pickard, was tackling the 100 miler for the first time in his career. But it was a disastrous river crossing rather than the distance which beat him, according to Tshabalala. “I was still feeling strong, but struggled with the river crossing shortly before the ‘Waterfall’ aid station ( 99km into the race).

“I fell three times and hurt my hip falling onto a rock. The marshall told me I shouldn’t continue, but I was determined to push through,” explained Tshabalala, who stated that his aim had been to run 18 hours for the race. “But my stride was badly affected and it took me 12km before felt more comfortable again.”

Tshabalala’s lead of an hour over Pickard at the Waterfall was slashed by 27 minutes over the next 15km as Tshabalala struggled to regain his racing stride. He was able to maintain a 30 minute lead through Olde Duck at 122km and Old Hatcheries at 127kms but the race changed dramatically in the following 9km. The strong-running Pickard upped his pace and ran down his rival, drawing level at the Drakensberg Garden Road check point 136km into the race.

“I felt this was a decisive moment,” said Pickard. “So I gave all that I had on the ascent from the aid station, but Simon kept coming. Finally I was able to draw away and I kept up the pressure, even though I was finished myself.”

Pickard was through check point 11 at Mzimkulwana, just 18km from the finish, less than two minutes ahead of Tshabalala, and it was still anyone’s race, but a significant climb before the Cobham aid station 8km further on decided the outcome. Tshabalala lost a further 15 minutes to Pickard, who opened the gap still further to clinch an impressive debut victory.

Keppler enjoyed almost as big a lead over Williamson, holding a 28 minute advantage over the defending champion at the second check point at the Sani Stone Lodge, just 32km into the race. And although Williamson grew more serious, running impressively up Thabana Ntlenyana, the high point of the race at 3482 metres,  and closing on Keppler, the latter again increased her lead on the descent into South Africa and was 50 minutes up on Williamson at the Waterfall, 99km into the race.

But Keppler slowed on the challenging section to Cobham Road, giving Williamson the chance to close the gap to just 11 minutes, before she caught Keppler shortly before the Olde Duck at 122km. Running strongly, Williamson looked every inch a winner, but Keppler responded to the challenge, staying the pace with her teammate in the Drakensberg Grand Traverse Team , scheduled later in the year.

The friends stretched and encouraged one another, staying together for 40km to cross the line together in joint 4th place overall.  Running her first race in Africa, Czech Republic ultra-marathoner, Marcela Rambova, did well to clinch the final podium position, finishing 7th overall in 29:09:29.

In terms of sheer racing quality, the Giants Cup Uncut over 62km (GCU62), along the five day Giant’s Cup Hiking Trail, was undoubtedly the cream of the crop, with intense competition between some of South Africa’s best trail athletes in both the men’s and women’s.

Race organiser Spurgeon Flemington had put up R25 000 for any male or female athlete beating the formidable 6 hour and 7 hour barriers and Johardt van Heerden, Daniel Claassen, Meg Mackenzie and Landie Greyling did not hesitate to relieve Flemington of his cash.

Van Heerden struggled in the early stages, allowing Claassen to build a lead, but came back strongly to demonstrate his ability to race against the best, powering to victory in 5:50:08, 22 minutes inside Two Oceans Marathon star Nkosikhona Mhlakwana’s 2021 record. Claassen was just less than five minutes back in second in 5:54:56 to earn his half of the incentive purse.

Rapidly improving Cape Town athlete, Joshua Chigome, was competitive for much of the race, before fading in the latter stages, but still held on to claim third in 6:23:03 ahead of Eastern Cape’s Mvuyisi Gcogco.

Once the queen of trail in South Africa, a combination of injuries and starting a family saw Greyling dropping off that lofty perch, while Mackenzie soared high in international competition. But the Stellenbosch athlete has lost none of her competitiveness and, under the guise of top distance coach Ernie Gruhn, has invested time in training in order to return to her best form.

Greyling stayed with Mackenzie through the first aid station at Swiman, 15km into the race, before the Chamonix-based Mackenzie opened a small gap on a climb before the half way mark at Castleburn, which she reached just over minute clear of Greyling.

“She was really pushing me,” admitted North Face athlete, Mackenzie, delighted to be back in South African trail competition. “And I could see she was not far back as we went through Castleburn.”

Greyling held on in impressive fashion, losing only another minute and a half to Mackenzie on the homeward run to claim her share of the incentive prize. “It felt good to be back and racing my old trail partner,” said Greyling. “We said at the start that we should both aim beat the incentive time and we managed that in the end.”

Cody Reed and Naomi Brand were expected to dominate the 100km, and both duly recorded record-breaking victories. Neither would admit to a perfect race, however.  The American, Reed, had suffered a gastric bug during the week leading up to the race and struggled in the early stages, leaving Roelof Mostert and then Brendan Lombard to take turns at the front of the pack.

What Reed lost on the steep climb up Sani Pass in the initial stages, he regained on the descent and overhauled Lombard to take the lead 28km into the race. Zimbabwe-born Admire Muzopambwa had also moved up from a conservative start and had moved into second at the Waterfall aid station after 35km.

Fifty kilometres into the race the gap was just four minutes, with Muzopambwe looking fresh and ready to challenge for the lead but a mixture of Reed’s strength on the hills and Muzopambwe’s tiring saw the gap increased to over thirty minutes at the finish, with Reed’s 10:35:49 well inside Rory Scheffer’s 11:25:02 set last year.  Lombard finished a further 40 minutes back in third.

Brand, now resident in New Zealand, found the going tough, but her class shone through as she raced home in fourth place overall to win the women’s competition by a staggering margin of 3 hrs 38 min over Michelle Fourie. Starting fast up the climb, Brand was just 35 seconds off the lead in third overall at the Sani Top aid station through 8km.

“I tried to run conservatively, but probably still pushed a little too hard,” Brand admitted. “The course is brutal, with that initial climb taking everything out of your glutes and a steep decent afterwards where you can easily blow your quads.”

Brand survived that ordeal and was still running strongly over the flatter section after half-way, where she moved up from 6th into 5th. “The middle section is where you can make good time if you still have the legs, but that flatter section tested me mentally.”  Cramps in the final section over two steep hills proved a final challenge for Brand, but she held on in determined fashion to clock 12:12:39 – 37 minutes inside Ann Ashworth’s record time last year.

“It was surreal to race in South Africa for the first time in two years, let alone in one of the most beautiful places and surrounded by so many people I know and love,” Brand acknowledged. “It gave me so much energy, and I often smiled to myself at the sheer wonder and privilege of it all. The support I received was out of this world and that carried me through right till the end.”

Arguably the most popular of the races was the 32km  Sundowner Run (SDR32), run along the second half of the Giant’s Cup trail, which saw some strong racing from the elites and much fun along the way for the middle and back of the pack runners.

Local KZN athlete, David Krone’s finishing strength proved too much for the leader at half way, Bongukwanda Dlamini, and LIV2run’s Sinovuyo Ngcobo, who had to be content with the minor podium places behind Krone’s 2:58:40 – 10 minutes inside Prodigal Khumalo’s record from last year.

Last month, Marion Leiberich and Lijan van Niekerk teamed up to win the THIRSTI AFRICANX Trailrun in the Western Cape. Both athletes proved their mettle in the SRD32, the German Leiberich racing home in 3:25:47, just over four minutes clear of Van Niekerk.

Although conditions were generally favourable for trail running, a number of athletes failed in their quest to meet the considerable challenge of completing one of the UTD race distances, notably in the 100 miler (UTD160). Ten hours before the cut-off at 10am this morning (Sunday 24 April) just 27 of the 83 starters had completed that race, with 28 having withdrawn. Running through their second night were 28 athletes remaining in the race in their quest to complete the challenge.