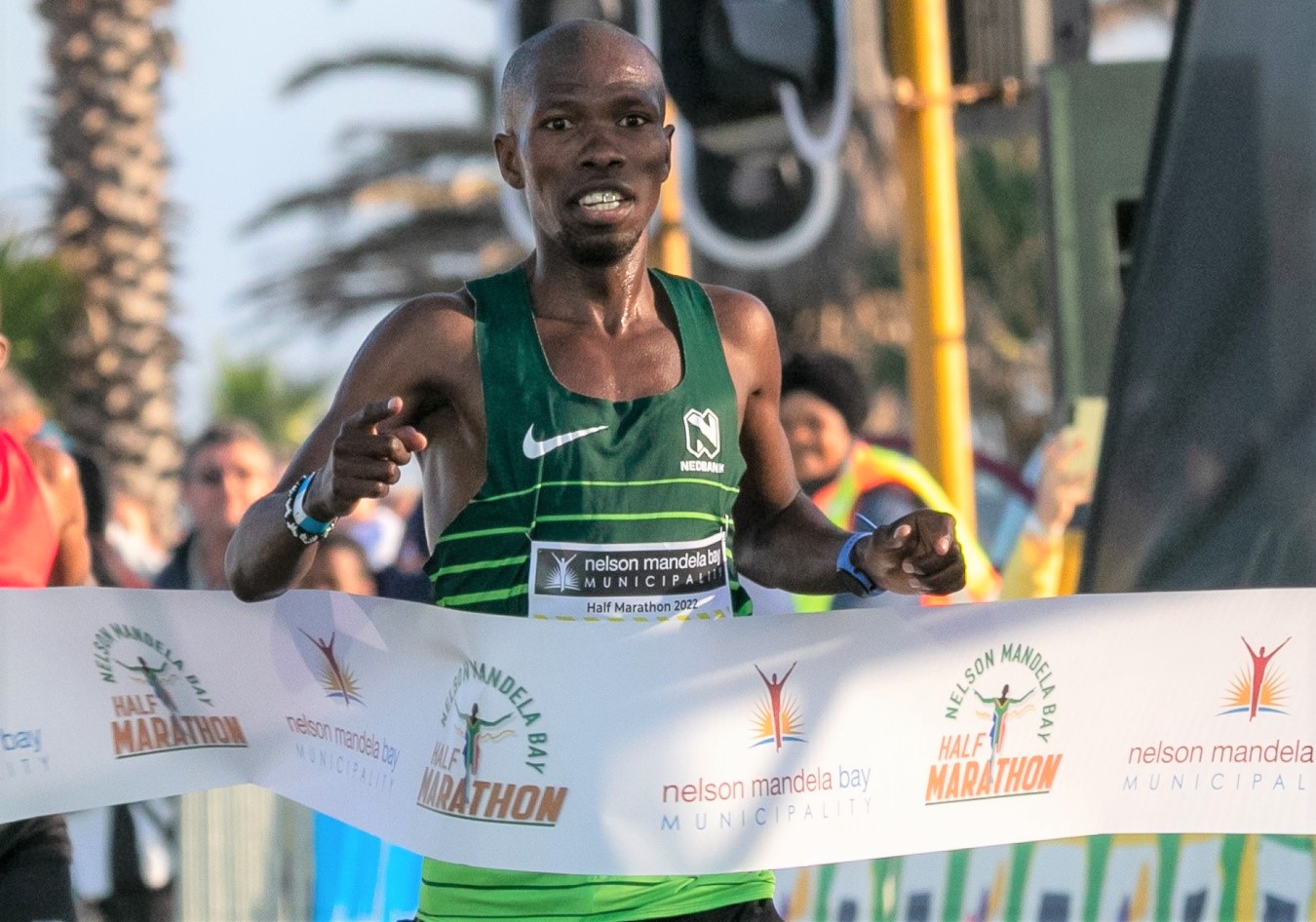 Perfect conditions and a proven fast course combined to yield a clutch of personal best and record times, with the most notable being a world record for women Masters (40 years) by 41-year-old Namibian, Helalia Johannes, who smashed Australian Sinead Diver’s previous mark of 1:08:55 by 1 min 6 sec in finishing a strong second behind Bezabh in 1:07:49.

Bezbha’s was arguably the performance of the day. Unlike her male counterparts, who allowed the competitiveness of the occasion to take the edge off lightning-fast times which the conditions offered, the young Ethiopian went out hard from the start and was never threatened, crossing the line in her personal best – a world-class 1:06:57.

“I’m really grateful to have been invited,” the softly-spoken champion remarked. “The weather and the event as a whole gave me confidence to run fast and I’m very happy with my run.”  Bezbha celebrated her fourth sub-70 minute half marathon in 2022, following a 69:36 in Italy in February, a 68:53 in Czech Republic and a 67:42 in Germany, both in April, improving her time on each occasion.

Bezbha led a group of top African athletes home under the significant 70 minute barrier, with Ethiopian Tadu Nare repeating her third place last year behind Johannes in 1:07:55 – the best of her life – with Lesotho’s Neheng Khatala the last athlete home sub-70 min, recording her best ever of 1:09:57 for 6th.

But it was Khatala’s compatriot, Nkhasi, who attracted earlier attention when he broke clear of a lead group of four in the final kilometre, immediately opening a gap of five then fifteen metres, leaving South African defending champion, Precious Mashele and his compatriots Stephen Mokoka and Melikhaya Frans trailing.

Gqeberha-based Frans, however, was not ready to concede on his home course and raced back to Nkhasi’s shoulder, but the athlete from ‘The Moutain Kingdom’, who has resurrected his career after a several lean years, had too much speed and held on to win in 1:01:01 – 1 min 18 sec quicker than his previous best.

“I am very happy with my performance today and want to thank coach (Michael Seme) Sponge who has really taken me to another level,” said Nkhasi afterwards, attributing his improved form to discipline. “I think the reason for my improvement is that I’ve been attending my coach’s training sessions more regularly!”

Frans, who came close to living up to his pre-race prediction of a win and a 1:00:30 time, was full of praise for the local Ikhamva team who have supported him. “This national title wouldn’t be possible without my coach Michael Mbambani (also the championship race director), our Ikhamva team and training partners, so this is for them,” said Frans.

Running with renewed confidence, Frans surged to the front of the field on a few occasions, notably shortly before 15km, where he raced clear of the 11-strong following pack for several minutes, holding a 2 second advantage through 15km (43:43), before Nkhasi upped the ante and took the title.

“If any athlete in South Africa wants to beat me, they will simply have to train harder,” boasted Frans at the finish, although he singled out Mokoka as the exception. “I respect Stephen – he is one of my role models. He has been pushing the pace for our sport for many years, and I promise I will follow in his footsteps.”

While Mokoka’s course record of 1:00:55 remained intact, a feature of the race was the close competition up front, with twelve athletes still in contention 4km from the finish and just 14 seconds separating the top six and 38 seconds the top ten in one of the closest championships in the history of the event.

Last year Precious Mashele outsprinted Mokoka in the final 400 metres to win in 1:01:17 and once again crossed the line with the South African distance-running giant at his shoulder. On this occasion, however, the pair placed 4th and 5th respectively, but a few seconds faster than their times last year.

“I rate my performance very strongly,” said Mashele. “I’m right where I need to be at this stage and I’m aiming for something even higher in the second half of the year.”

It has been a long comeback for Xaba, but her form is gradually returning. While her 1:10:41 was over two minutes slower than her time last year, it proved enough for 7th position and the gold medal, edging out Pretoria athlete, Irvette van Zyl, for the championship title.

“The race was really good but I was very weak in the final 5km,” admitted Xaba. “I was just hanging there to finish the race and defend my title. I’m happy with my performance and to run my season’s best is a great after my challenges with injuries.”

The event proved a celebration of athletics in the Eastern Cape capital city, with the Nelson Mandela Bay Municipality taking pride in its World Athletics Label Event. “Our Municipality continues to play a key role in developing local talented athletes in the region and the seeds of the Legacy Project are now bearing fruit,” said Nelson Mandela MMC of Department of Sport, Recreation, Arts & Culture, Bassie Kamana.

“Boosting sports tourism is high on the city’s agenda and partnering in high profile events which achieve international participation and exposure like this event are well suited to this goal.”

And the event gained a strong nod of approval from World Athletics Road Running Manager, Alessio Punzi, who attended the championship in his official capacity to advise and assess the WA Label Race.

“The race was very well organized. It was great to see that it had the full support of Nelson Mandela Municipality,” remarked Punzi. “Although it was on a smaller scale than some of the big road races and marathons, it went smoothly from start to finish.

“Everything was in place, everyone knew what to do.  It’s impressive that a city which is not a major capital has two World Athletics label events and is putting its money where its mouth is. Mike Mbambani is a terrific guy and top race director. I’m absolutely happy with how it went today.”