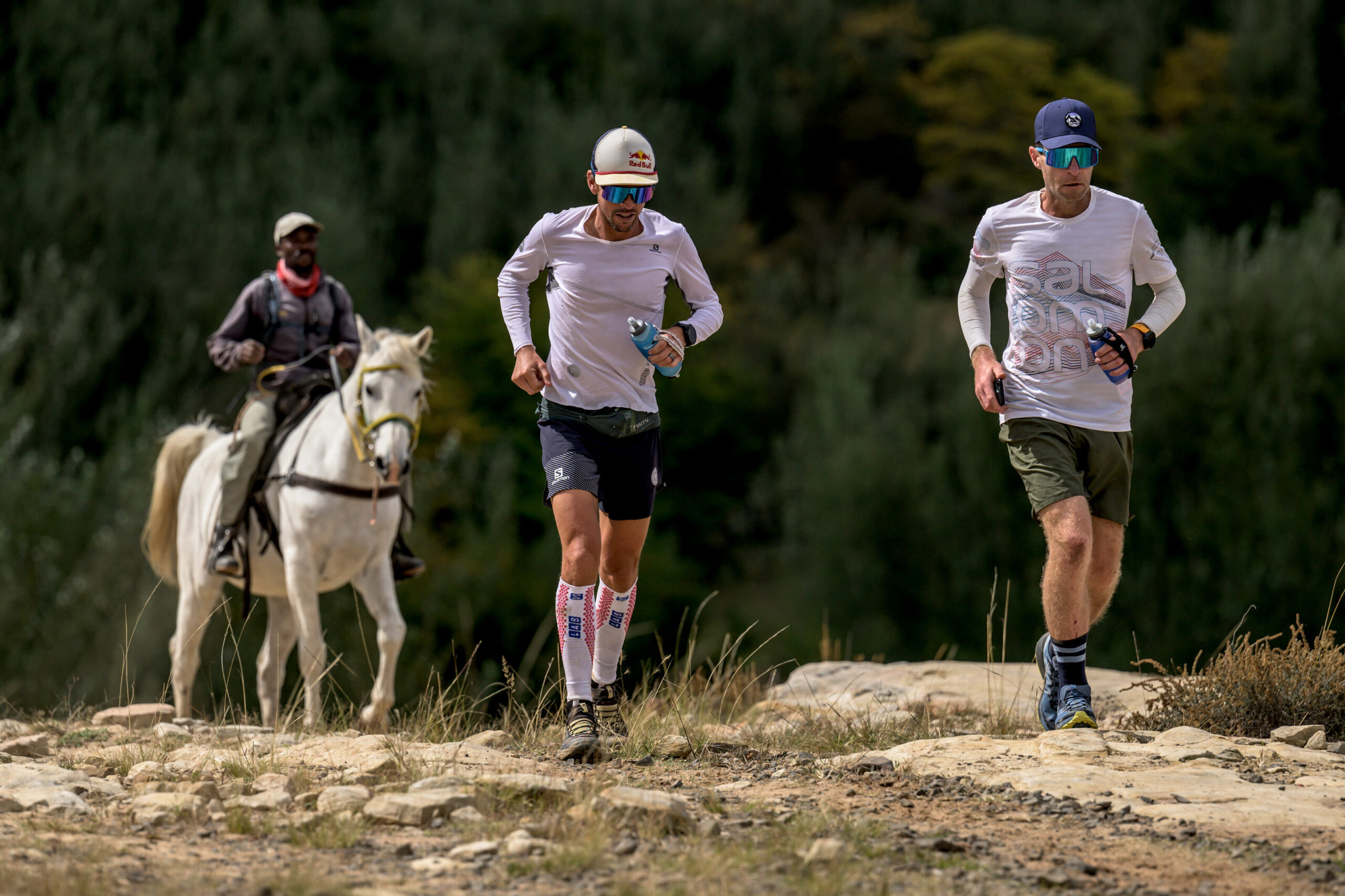 Known as one of South Africa’s all time ultra-trail running greats, Ryan Sandes is fast challenging the likes of Mike Horn and Riaan Manser as the country’s top adventurers and together with his adventure-partner-in-crime, Ryno Griessel, has recently added the single-effort circumnavigation of Lesotho to his ever-growing adventure CV.

Team Ryan – Ryno completed ‘Navigate Lesotho’ – almost 1100km around the perimeter of the landlocked country – in 16 days 6 hours and 56 minutes at an average of just under 69km per day with a total elevation gain of 33 000m, the equivalent of almost four ascents of Mt Everest starting at sea level each time.

Previously Sandes and Griesel had set the fastest known time for the 204km Drakensberg Grand Traverse before improving the record for the Great Himalaya Trail, which they completed in just over 25 days.

A 24-hour weather delay at the start of their run might have been a portent of what lay ahead, but 6am on 11 April saw the venture underway. Starting at Telle Bridge Border Crossing just west of South Africa’s best-known ski-resort, Tiffendal, the intrepid duo stepped their way into mountain country in the Southern Drakensberg at the start of their ‘Incredible Journey’ to complete an anti-clockwise circuit around ‘The Mountain Kingdom’.

The route would take them the entire length of the Drakensberg range – the first persons to have ever achieved that in one attempt – and across many iconic passes and peaks, including Ongeluks Pass, Qacha’s Nek, Sani Pass and Thumatu Pass and the summit of Mafadi Peak, at 3446m the highest point in South Africa, straddling the Lesotho border.

They could not have chosen a more severe test of their physical and mental resources. And they could not have known just our severe that test would be. Driving rain and / or snow on thirteen of the sixteen days of the adventure would have caused most to abandon before half-way and came within a hairs breath of scuppering their quest.

Water courses which had greeted the pair as a benevolent trickle on their reconnaissance, run a month before, now raged at them as impassable 100-metre-wide torrents, forcing them to think on their feet and abandon long-planned routes in the interest of safety and survival.

“It was definitely a lot more challenging than we initially anticipated,” admitted Sandes. “Especially the extreme weather we experienced in the mountain section – ice, snow and severe cold. There were some really cold nights out there, when we didn’t think we would make it through.

“All those curve balls make for real epic adventure, though, with some incredible memories I’ll hold onto forever. We’ve been on enough crazy adventures together to know that the key is ultimately trust and respect. I wouldn’t want to have achieved this with anyone else.”

Ryno Griesel typically talked down the extent of the adventure but conceded the level of challenge involved. “It felt like we were building a puzzle,” he explained. “Often we had to take a couple of steps back to move forward again and that was mentally quite challenging. Running through the mud and doing multiple river crossings was pretty slow going.”

After keeping on course through cold, wet weather around the south-eastern perimeter, Sandes and Griesel reached Qacha’s Nek on Day Four in good spirits and ahead of schedule. But their toughest moments lay just ahead and as the weather continued to deteriorate, decisions would have to be made which could make or break their mission.

Instead of onward progress towards their target, Day Six saw the pair bunkering down and sheltering at Bushman’s Nek camp site from a severe weather incident.

“Day Six was not the day we had planned,” said Sandes from their tent in which they spent the majority of their nights on the trail. “We had been hoping to make it through to Sani Pass and had been continuing on and upwards above 3000m, when the weather turned from bad to severe. We decided to back-track and walk back down to safety.

“The toughest part of the adventure was definitely the weather and having to make responsible decisions,” Sandes reflected after their mission. “It was important to be able to trust your gut and stick with that decision. On day six we knew the storm was due to hit around 3 or 4pm that afternoon. I realized we would not make it through.”

An important element of Sandes and Griesel’s adventure was the pre-arranged guidance and company of local shepherd guides on horseback.

“We had been with the horses on top of the escarpment,” Sandes recalled. “We had been sodden through the entire night and I was cold and shivering. Fortunately, one of the shepherd guides was able to lend me his jacket. But he had been eating lamb chops the night before and all I could smell was his braai, when I was starving!

“But on Day Six we were standing up there high on the escarpment, shivering again. We had been split up from the horses – they were way down below. I was trying to shout down but it was snowing and they could not hear. I thought that Ryno and I might make it, but I wasn’t sure about the horses and that was a concern.

“Luckily, I was able to radio them and I told them to turn back. You get so focused on the project and its goal and it’s hard to take a step back. But you also want to get out of the project in one piece. It was really difficult to make that call. You never know – is it just that I’m getting old and soft?

“Before we walked out, Ryno and I had been on our own in a tent, high in the mountains – you’re so remote and cold. We had a light-weight tent and sleeping bag, but even with all our clothes in sleeping bag, you just shiver for four or five hours, feeling your organs inside are freezing – like the start of hypothermia. You’re so tired, but you can’t sleep.

“So walking off the mountain, I did feel that it could be the end of the project,” admitted Sandes. “We were pulling the plug – and that was hard.  But then we spoke to (his sponsor) Red Bull and realized we wanted to go back and continue. The forecast predicted the storm would clear within 24 hours and we decided to give it another bash.”

After a second night at Bushman’s Nek, the pair departed before dawn, determined to rise about the challenges and achieve their goal and that night they reached their overnight chalet at the Sani Pass Border Post.

Despite the snow and cold weather which still prevailed, the next days on the escarpment proved intoxicating, providing some of Sandes’ adventure highlights.

“For me this was the most memorable part of the trip,” related Sandes. “At the end of the day we would get to shepherd’s huts and ask them whether we could stay the night. Some of the guys on horseback would stay in the hut with the local shepherds and we camped right next door. It was really cool – not many people would ever have that experience.

“One morning we woke up in the most remote of places and some of the horses had disappeared. We were worried about horse theft but fortunately after about two hours we managed to find them.  Ryno and I would have been ok, but the horsemen with their saddles without horses would have been in a mess!”

Rich experience notwithstanding, the pair had had enough of freezing climes and on Day Eleven opted to push through for 24 hours without sleep to reach the end of the escarpment at Mont-Aux-Source and the promise of warmer weather on the lower-altitude western border.

“The last few days have been pretty epic,” Sandes noted at the end of Day Ten. “There has been loads of snow but the weather has cleared. The nights have been extremely cold – the past two nights in the tent were the coldest I’ve ever experienced. Looking forward to dropping into the lower lands.”

After 650km in the high mountains Sandes and Griesel overnighted just 20km from the end of the range and their point of descent, looking forward to warming themselves for the remainder of their voyage of adventure.

“We have about 20 kays to go,” wrote Sandes at the end of Day Twelve. “Some really extreme weather conditions have taken us way out of our comfort zone. The terrain has been slow-moving and it’s really taken it out of us. But at the same time, I’m stoked with the experience and it’s cool to think that we will have soon traversed the entire Drakensberg range in one go. I’m not sure if anyone else has done that before.”

But the mountains had not yet conceded defeat and the pair were surprised to find further challenges and stoppages on the last day at high altitude. “We thought we would be off early in the morning, but it ended up late in the afternoon,” Sandes recalled. “I remember asking Ryno if it was okay to swear and said to him ‘I never want to see another f..king mountain again’!”

Later, looking back on their time in the mountains, Sandes began to grasp the enormity of the physical and mental challenges they faced. “You’re wet all the time, often knee-deep in mud and bog, then at the end of the mountain section we had a lot of snow. Although at first it was cool, we were soon over it and it proved increasingly challenging trying to move quickly in knee-deep snow. Our feet in the mountain section took a real hammering. Not so much blisters, but heavy bruising, so we were really sore.”

While the toughest part of their challenge was over, Sandes and Griessel faced new challenges as they dropped altitude and increased air temperature and oxygen. “Dropping down along the western side we thought it would be much easier, but very soon we saw that everything was completely flooded.

“At times we were running up to our waist in mud and we were forced to change route many times to cross the rivers and find drier land,” Sandes explained. “I was tempted to swim one raging river, but luckily common sense prevailed. There were so many submerged trees there and you could get into trouble quite quickly.”

But with the end in sight, nothing could halt the progress of the two mountain mates, who must now rank with some of the world’s most daring adventurers. A long stretch from Butha-Buthe in the north west to the Lesotho capital, Maseru, on the western border on Day Fifteen preceded a final ‘all-nighter’ with just 100km to the finish, but not without some final testing mud and water obstacles.

Early on the seventeenth day, 16 days, 6 hours and 56 minutes after departing Telle Bridge Border Post, Ryan Sandes and Ryno Griessel ran up to the border post in triumph, broad smiles signalling immense satisfaction at their achievement, but also masking the pain of the physical and mental exhaustion they had to endure.

Back running trails on his favourite Table Mountain, Sandes looks forward to yet more challenges. “This year I’m going back to Ultra-trail Mont Blanc 100 miler (August 2022) – that’s the one monkey I don’t seem to be able to get off my back. I have had four DNF’s there, so hopefully it will be fifth time lucky!

“I always thought I’d run one of the longer trails in American, like the Appalachian Trail, but since COVID I’ve become more interested in exploring local trails and investigating possibilities in southern Africa.

“In hindsight I enjoyed the project more than the Himalayan adventure,” Sandes concluded. “It was really cool to have the support of local shepherds on horseback in the mountains and our support crew on the western boundary – faces we knew. All in all, it was a collective effort to pull off the adventure.”