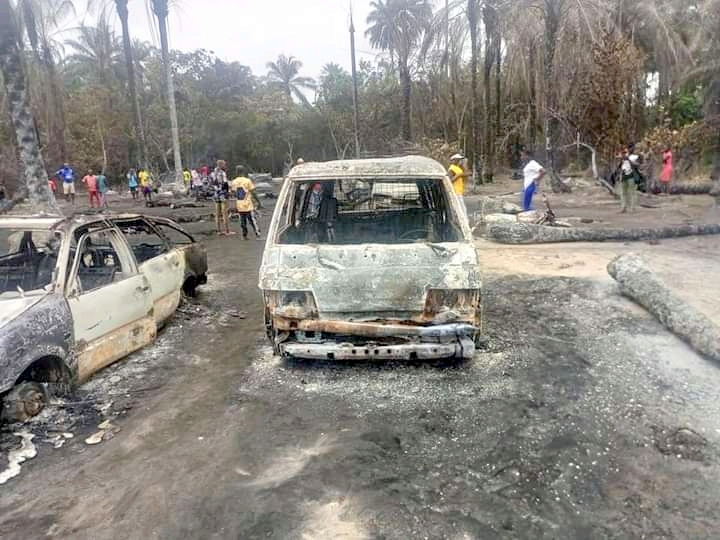 The Commissioner for Petroleum Resources in the state, Goodluck Opiah, who visited the area on Saturday, said the incident was unfortunate.

During his on-the-spot assessment visit, the commissioner said he could not confirm the actual casualty figure.

“At the moment, I can’t really confirm the number of the deceased because many family members have removed the corpses of so many others,” the commissioner was quoted in the local media as saying.

Multiple witnesses in the local media, however, put the casualty figure between 100 and 200, as of Saturday.

The commissioner said the state government has declared the owner of the illegal refinery, Okenze Onyenwaoke, wanted.

He advised Mr Onyenwaoke to make himself available to the police immediately.

“Most of the people who are engaging in this act are from Rivers, Bayelsa and other neigbouring states and it is sabotage for our people to allow this illegal act to continue.

“Apart from this calamity, the act has destroyed the aquatic life in the community. Our people before now were predominantly farmers and fishermen.

“Look around, you will find smoke coming from this illegal act. If this is not enough for any person to stop, I think the community is heading for what I can’t describe,” said Mr Opiah, who hails from the area.

A resident of the area, Daniel Opara, told PREMIUM TIMES that majority of the victims in the incident were youth. He said the people were unable to escape because fire covered the whole forest.

“I rarely see old people involved in this illegal act. They are mainly youths,” he said.

Mr Opara, however, could not say if the people were all from the state or the neigbouring states.

“It is a popular business here. I think they make it there, that’s why they take such risks,” he added.

A video clip shot at the scene of the incident and shared in various social media platforms shows horrible images of the victims burnt beyond recognition littering the environment.

Oil theft, known as “bunkering” in local parlance, has been a source of concern to many stakeholders across the country.

The Nigerian government was reported to be losing an estimated $4 billion yearly due to oil theft activities.

In Rivers State, air pollution, especially the soot in Port Harcourt, the state capital, and its environs, has been attributed to the operation of illegal oil refineries.