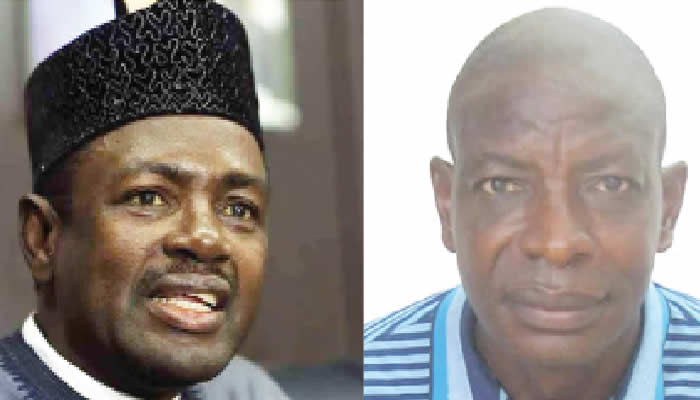 A former Minister of Information and ex-governorship aspirant of the Peoples Democratic Party in Nasarawa State, Labaran Maku, speaks to COLLINS SUNDAY about the assassination of his campaign agent, Zakari Umaru-Kigbu, by some gunmen last Saturday

What was your relationship with the late Zakari Umaru-Kigbu, who was assassinated last Saturday in his home in Nasarawa?

He was my brother, friend and political ally. We met many years ago in Lagos State. We were quite young then but we supported each other and lived happily.

At that time, he was working with the Nigerian Air Force. He later left the job and we both returned to Nasarawa State.  Since our return, he had served as president of our cultural group, the Eggon Cultural and Development Association; he also worked with the state-owned Isa Mustapha Agwai Polytechnic in Lafia and he served as the National Population Commission Federal Commissioner in Nasarawa State.

He worked with the military using his secondary school certificate but after that he acquired two different degrees in Mass Communication and Law. He was waiting to go to law school while he was also studying to be a PhD holder at the Nasarawa State University in Keffi.

How did you receive the news that he was assassinated by some gunmen?

I am pained that for close to two hours when the criminals were trying to break into his house, Zakari tried calling the police and the military but they were not able to rescue him. Some people went to report at the police station in the area and the police sent only two personnel who came with just one gun, but when they noticed that the criminals were fully armed, they went back and left Zakari and his family in the situation.

What surprises me is that his house is not far from the road in Azuba Bashayi, Lafia North Development Area in Lafia Local Government Area of the state. By the time the military arrived, he had already been killed and they took two of his children away. My prayer is that God Almighty should accept his soul and grant him eternal rest.

How will you describe Umaru Kigbu?

He loved God so much. Anytime we met, he always spoke about living a good life that would make God happy. He was very concerned about how he lived with people. He was not a troublemaker.

Zakari never slept at night with anger in his mind. If anyone offended him, he always forgave the person before going to bed at night. He always told me that forgiving people made him happy because that is what God wants from all humans. He was very patient and always willing to listen to me.

Who are you to the late Zakari Umaru-Kigbu?

I am the fifth child of Zakari Umaru-Kigbu and I am his only daughter. My name is Umaru Hajiya Asheku.

Where were you last week Saturday at the time of the attack that claimed his life?

On that fateful day, May 28, 2022, I was in the parlour of our house with my father, mother and siblings; we were watching a programme on television.

How exactly did the incident happen?

While we were watching the programme, my father and mother went to their rooms to sleep. Some of my siblings also went to sleep because the incident happened around 11pm. I was left in the parlour with one of my brothers, who was transferring some files to his computer.  Suddenly, we heard a gunshot in our compound. One of my siblings immediately ran to lock the kitchen door leading to the backyard.  Some of us ran to our father’s room to hide while others went to hide in our mother’s room. The criminals, who were fully armed, forced the entrance door open and were coming straight to our father’s room. When my father noticed that they were coming towards his room, he told all of us in the room to go out and hide in the storeroom.

The attackers tried to break his door but they could not because it’s a strong door. They began to search for us. When we noticed that they could easily find us in the storeroom, we went into our mother’s toilet to hide while praying that God should help us out of the situation.

They kept searching for us in the house and they were wondering where we could be. So, while they were searching all over the house, they heard us whispering in the toilet where we were hiding. They then asked us to come out or they would break down the door and shoot all of us. Because we were scared, we refused to come out. So, they told some of their members who were standing outside to shoot us through the toilet window. So, they started shooting but we were all bending down while they were shooting.

As the attack went on, my father made several attempts to call the Nigeria Police Force and the military to come to our aid but he did not get a positive response at that moment. So, he had no other option but to come out of his room in order for him to protect us and that was when they shot him. When we heard the gunshot, we all rushed out and saw him on the ground in the pool of his blood.

How many were the attackers?

Those that came into the house were four in number, but others were in the compound. We also heard from neighbours that other criminal gang members were strategically stationed in several corners of the street on that fateful night.

Does the family know what the motivation for the attack could be?

We do not know. We are not troublemakers; so we never expected such an attack.

Does the family think it is politically-motivated as your father was an agent to a governorship aspirant?

Our father was very close to politicians because of the positions he had held in the state and his contributions to the growth of society but as I said earlier, we do not know the reason for the attack.

Did your father mention to you, any of your siblings or mother that he had issues with anyone?

He did not mention that to any of us. I don’t think he had issues with anyone because he was a man of peace. He always forgave those who offended him because he was a devoted Muslim. But I do not know if someone had bad plans for him.

During the attack, did the attackers say anything that suggested or revealed the reason for the attack?

When they came that night, they were shouting that we should open the door because the days of my father were over. They said they must kill him before leaving the house that night.

What were your father’s last moments like?  Did he say anything?

When they shot him and we all came out and saw blood all over the place, he looked at us passionately but could not speak because he was already weak.

He was 60 years old. How many wives and children did he leave behind?

He had one wife and six children.

Two of your sisters were said to have been kidnapped by the attackers. What are their names and ages? Are they students?

I read in the news that two of my sisters were kidnapped but it is not correct because I am the only biological daughter in the family.

The people kidnapped are my immediate elder brother and our cousin who lives with us. And yes, they are students. My brother’s name is Umaru Musa Anzaku; he is 22 years old while my cousin is Hadiza Zakari. She is about 30 years old now.

They kidnapped them after killing our father and they took all our phones except my father’s phone that he was using to call for help, which he later put somewhere in his room.

Did the hoodlums call the family to make any demands?

Yes, they called us. They demanded N60m as condition to release my brother and cousin.

Have the police made any arrests?

At the moment, I have not heard that they made any arrest.

What kind of a person was your late father?

He was a simple man; a very easygoing man. He always prayed for all of us to be successful in our chosen careers. He also prayed for extended family members and friends. He taught us how to forgive those who hurt us. My father was a good man.

What were his plans or unfulfilled dreams that he discussed with you?

He wanted my siblings and me to finish from school and get good-paying jobs so that we can be independent. His plan was for us to become financially stable in the future so that we can also help the underprivileged in society.

How is the family taking the tragedy?

It has not been easy for us. We have all been crying since that Saturday night. Our father was shot dead in our presence. The pains are unbearable.

Has he been buried?

Yes. He was buried on Sunday.

What are the demands of the family over this incident?

We are demanding the release of two of our siblings who are with the kidnappers at the moment. We want them to return home; so we are appealing to the government and good-spirited individuals to help us out of this situation.

What have the police done since the former NPC commissioner was killed and his children kidnapped?

I am ASP Ramhan Nansel, the Police Public Relations Officer in Nasarawa State. His children have been rescued today (Wednesday) but we have not arrested any suspect in connection to the crime.

How were they rescued?

We located the hideout of the kidnappers and immediately mobilised our personnel to go after them. The children were rescued due to the pressure mounted on the criminals by officers of the command at a mountainous location in Nasarawa Eggon Local Government Area of the state. The criminals left Zakari’s children there and ran away.

After rescuing the children, they were rushed to the Dalhatu Araf Specialist Hospital, Lafia for proper medical examination and from there, they were taken home to reunite with their family.

Was any ransom paid for their release?

I do not think that ransom was paid for their release. I am not aware of anything like that in the matter.