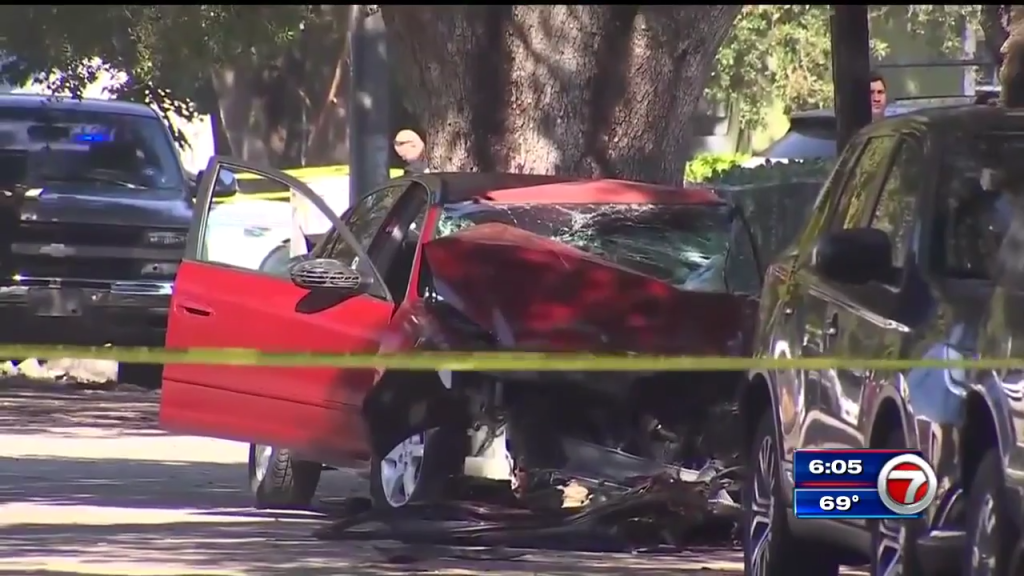 “I’m stunned that she that she passed away, I mean, stunned,” said Mayra Sanchez’s neighbor, Steve McKee.

Police are searching for answers after a deadly drive took the 63-year-old’s life.

“She’s one of the best people in this building, if not the best,” said McKee.

7News talked with the family, and they are very upset and seeking justice.

The suspect driver crashed into the fence at Northwest Third Street and 11th Avenue.

Police told 7News Sanchez was one of the two people inside the red car.

Police said it happened when the driver of a white Range Rover collided with Sanchez’s car. Five other unoccupied cars were also hit.

Before the Range Rover crashed through a fence, police said three men, between the ages of 17 and 20 inside, got out and took off.

Miami Fire Rescue took both Sanchez and another woman passenger to Ryder Trauma Center, where Sanchez died and the other remains in serious condition.

“She was very friendly with me,” said Esparanza Perdomo, Sanchez’s neighbor and longtime friend.

Perdomo said she was very friendly to her and everybody.

“She’s a super, super beautiful person, used to give rides to people. Whatever they needed, she was there,” said McKee.

As friends and family come to terms with the loss, they’re hoping justice is served.

“To hit someone like that and just leave, that means that you have no heart, you have no soul,” said McKee.

Police are still looking for the people inside the Range Rover.

If you have any information on this hit-and-run, give Miami Police a call, or call Miami-Dade Crime Stoppers at 305-471-TIPS. Remember, you can always remain anonymous, and you may be eligible for a reward of up to $5,000.

Copyright 2021 Sunbeam Television Corp. All rights reserved. This material may not be published, broadcast, rewritten or redistributed.