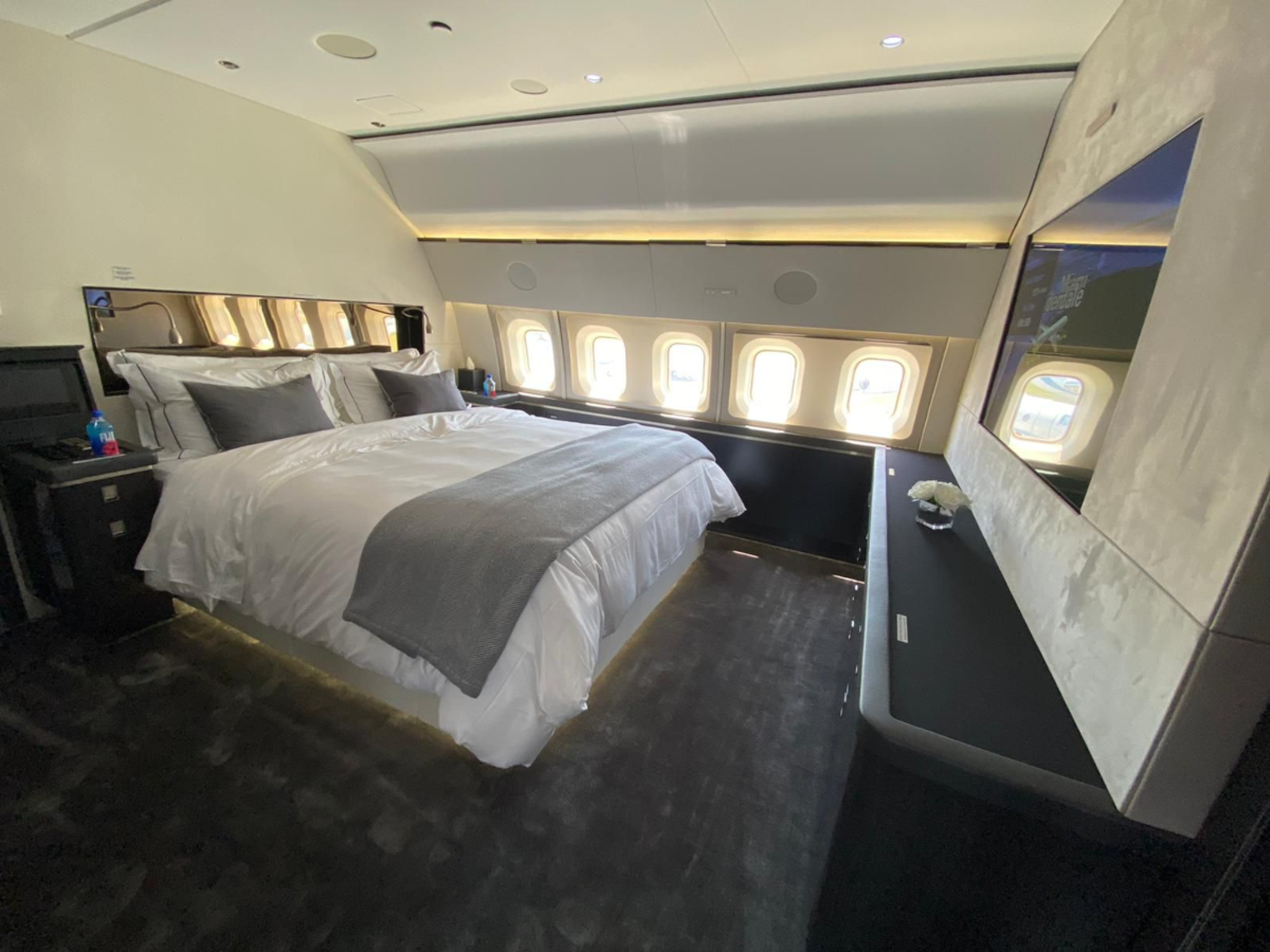 John H. Ruiz doesn’t stop. The billionaire lawyer says he only gets about three and a half hours of sleep each night, and when he’s not sleeping, he’s working — whether that means running his multibillion-dollar law firm, MSP Recovery, or searching for a new football stadium site for his alma mater, the University of Miami (UM).

Even his newly refurbished private aircraft, a Boeing 767, which was formerly a Qantas passenger plane, is meant to be a mobile office where Ruiz and his employees can work and stay online while jetting around the nation for business deals and meetings.

“Connectivity with the outside world when you’re flying is important. Wi-Fi, bandwidth, being able to get projects up on these screens so we can work while we’re traveling is extremely important,” Ruiz tells New Times while seated on a couch in the airplane’s theater and entertainment area. “I’m somebody that doesn’t do much other than just work a lot.”

Media and spectators have gathered on this Wednesday afternoon to tour Ruiz’s plane, recently refurbished by VIP Completions, an airplane maintenance company that specializes in luxury interior design for private airplanes for the ultrawealthy. Members of the press were invited and shuttled in premium Ubers — paid for via a one-day voucher by VIP Completions’ PR company — to the company’s private hangar and office at Fort Lauderdale–Hollywood International Airport.

The office is a testament to the opulence of the company’s clientele. A private bar is stocked with bottles of Don Julio 1942 and Casa Dragones tequila. In the bathroom, there’s a painting of the Monopoly Man on a private jet with cartoon money bags — a decorating detail that’s perhaps too on-the-nose yet nonetheless entertaining to ponder as you relieve yourself.

A painting in the restroom at VIP Completions’ private hangar and office.

In the hangar itself, women with Gucci handbags and designer dresses mingle at brunch alongside two private jets that VIP Completions is refurbishing for other clients. Beside them sits another piece of Ruiz’s collection: the 1949 Buick Roadmaster from the movie Rain Man.

Ruiz strides in with a distinctly “cool guy” demeanor, dressed stylishly yet casually in a sport coat, denim jeans, sneakers, and Gucci sunglasses.

Though it was formerly a passenger plane, it’s hard to imagine hundreds of Aussie passengers sitting elbow-to-elbow on this aircraft. The plane feels more like a penthouse suite in a luxury hotel that just so happens to fly through the air. In the master bedroom, there’s a queen-size bed and a full bathroom with a shower. There are not one but two lounge rooms furnished with couches that convert into guest beds, as well as a separate dining room/conference room and the aforementioned theater.

One of two showers on Ruiz’s plane

The plane, which formerly accommodated about 300 passengers, now seats 30 and can comfortably sleep about 17 overnight passengers, explains VIP Completions president Ben Shirazi, who can’t remember whether this is the fifth or sixth plane his company has refurbished for Ruiz.

The plane feels more like a penthouse suite in a luxury hotel that just so happens to fly through the air.

This plane, however, is the most time-intensive project VIP Completions has…completed. The remodel required more than six months and cost nearly $10 million. Though VIP Completions procured the plane for Ruiz from another billionaire who’d already configured the bedroom and entertainment areas, the company renovated the interior with new surfaces and appliances, including leather seats, sleek new cabinets, LEDs, and television monitors.

The dining/conference room on Ruiz’s plane

Before the plane takes off for its 20-minute press junket down the coastline to Opa-locka Executive Airport, Ruiz remarks that 15 years ago he had a fear of flying. Back then, he wasn’t exorbitantly wealthy, nor did he spend his days flying helicopters over Miami to scout potential football stadium sites.

Though previously a high school sports broadcaster and cable TV show host, Ruiz made his name and money as an attorney, most recently and profitably with MSP Recovery. The company started out as a firm that specializes in recovering insurance payments to healthcare providers made by the government through Medicaid and Medicare when they should have been paid by a different responsible party, such as an auto insurer. Through a software Ruiz developed, his firm identifies insurance claims that weren’t paid by the responsible party and sues them, collecting double damages.

MSP Recovery evolved into a parent company for Ruiz’s various other ventures, such as LifeWallet, a healthcare application that allows users to access their medical history and documents. Ruiz has also invested in other industries that have caught his fancy, including the purchase of Cigarette Racing boat builders.

VIP Completions President Ben Shirazi can’t remember whether this is the fifth or sixth plane his company has refurbished for Ruiz.

Most recently, Ruiz shocked UM fans — and the City of Coral Gables — when he announced that he wanted to build a new stadium on the current site of Coral Gables Senior High, not far from the university’s main campus. (He made the announcement without consulting either the city or Miami-Dade County Public Schools, which owns the lot where the high school sits. Ever since the Orange Bowl shuttered in 2008, the Miami Hurricanes have played at Hard Rock Stadium in Miami Gardens; Ruiz, a UM alum, wanted to boost turnout and morale.

Ruiz was also involved in the selection of new UM football coach Mario Cristobal, to whom he’s related through marriage. Moreover, Ruiz signed several university football players to million-dollar marketing deals through LifeWallet under new NCAA name, image, and likeness rules that allow college athletes to profit from their own brands. LifeWallet has signed other college athletes, such as Nijel Pack of Kansas State University to marketing deals, and Ruiz intends to fly the athletes he signs on his new plane.

The short flight aboard Ruiz’s plane passes in a mostly leisurely fashion, punctuated by one brief jolt of turbulence that sends the selfie-taking journalists and influencers scurrying to their cushioned couch seats. Ruiz periodically pokes his head into each room and remarks to his guests and partners how nice his latest acquisition is.

Wheels touch down in Opa-locka at 3 p.m., where a Rolls Royce and Range Rover await Ruiz, Diaz, and their associates. Media, PR, and other spectators take a white airport van to the nearest drop-off point to await their luxe Ubers back to reality.

Beyond serving as his office in the sky, Ruiz says, he has plans to charter his plane for private flights. Those flights likely won’t be for those who take vans over Rolls Royces and Range Rovers, but perhaps for those who can afford to dream of multimillion-dollar stadiums in their spare time.