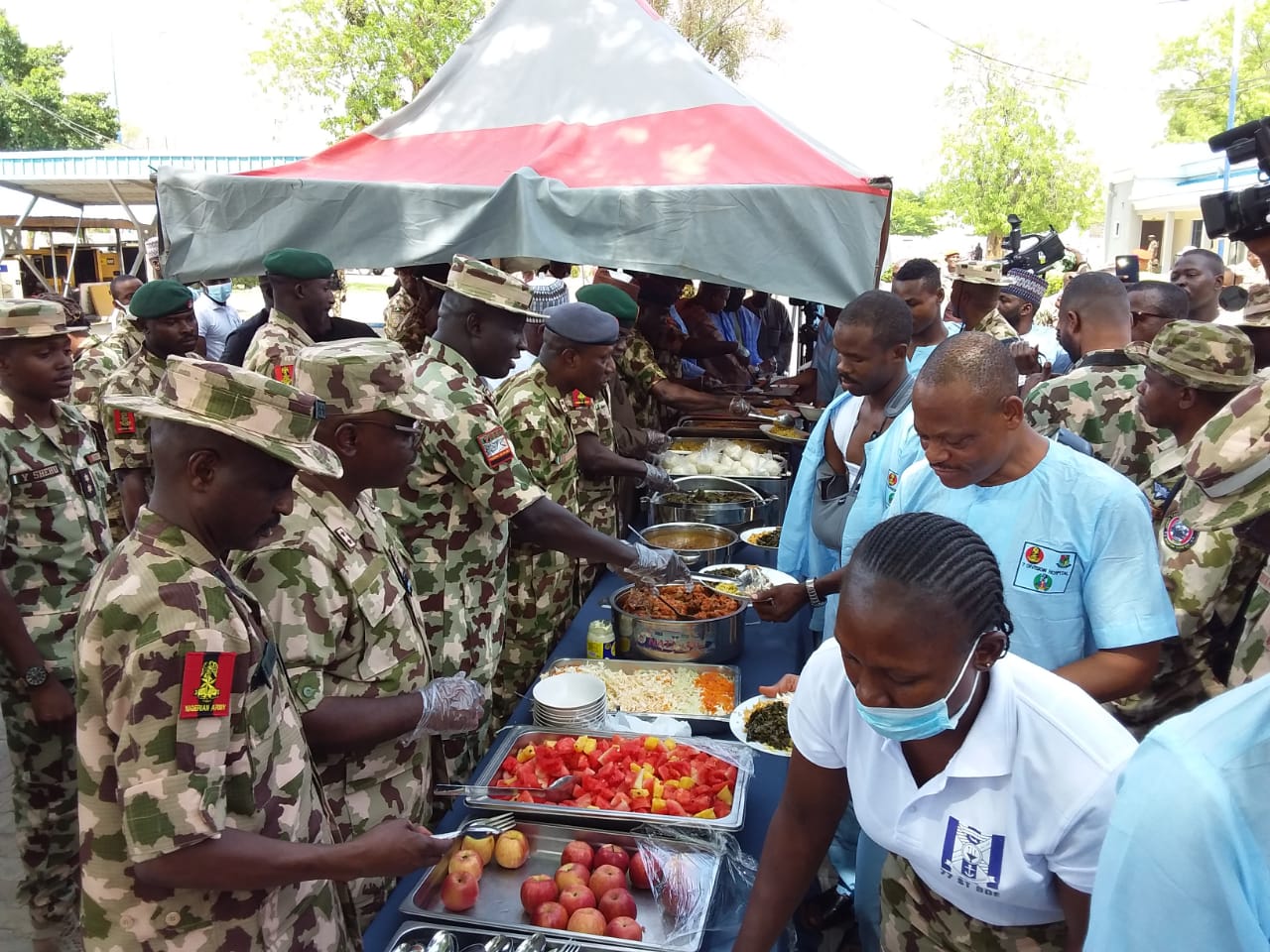 Nigeria’s military chiefs on Monday in Maiduguri, Borno State capital, urged troops to be ruthless in the battle against terrorists who have been attacking swathes of the country in recent years.

The military chiefs had joined frontline troops in celebrating the end of Ramadan.

Chief of Army Staff, Farouq Yahaya, a Lieutenant General and the Chief of Air Staff, Isiyaka Amao, an Air Marshal, had hosted both serving and injured troops in celebrating the Eid.

The two military chiefs usually host their respective service troops at the frontlines to separate celebrations during festive periods.

But to underscore their new commitment in the fight against the Boko Haram insurgency, the two military commanders decided to have a common celebration with the troops.

Mr Yahaya said he was impressed with the recent outings of the troops, both of Operation Hadin Kai and MNJTF around Lake Chad and the fringes of Sambisa Forest.

He said he still maintained his earlier order to deal with the terrorists and bandits ruthlessly.

Mr Yahaya said the military would be deploying more “war platforms” that would enable the troops maintain their superiority over all outlawed groups that have picked up arms against the state.

“We shall continue to provide your needs and other enablers for your optimal performance.

“The Sallah gift I expect from our troops is the neutralisation of all enemies of our nation to make the country safer,” he said.

The chief of air staff had earlier said the military command chose to celebrate the Eid el-Fitri with the troops because of its symbolism and enduring message of sacrifice, selflessness and commitment.

“We are drawn to reflect on the significance of the messages of Ramadan, especially for our troops on the frontlines that make sacrifices to ensure the security of our dear nation. Maintaining this level of efficiency in the frontlines while away from your loved one during festive seasons like this demonstrate your nobility of placing service before yourself.”

He assured the troops of the nation’s commitment to “continuously provide the needed supports to sustain land, maritime and air operations against terrorism”.

The CAS acknowledged the recent “heart-warming” successes in the Operations Lake Sanity and Desert Sanity, hoping that “sanity would soon be restored in the Sambisa forests, Mandara Mountains, Timbuktu triangles and Lake Chad regions”.

He called on the troops to maintain the highest level of vigilance and combat readiness to guarantee improved security.

He also said “the Nigerian airforce remains committed to providing the air component with the necessary equipment to support the joint operation to ensure peace in the region.”

Meanwhile, the Deputy Governor of Borno State, Umar Kadafur, who was a special guest of honour at the Eid el-Kabir luncheon that took place at the Nigeria Air Force Base Maiduguri, commended the military “for the good job they’ve been doing in restoring security in Borno State”.

Mr Kadafur, who represented his principal, Governor Babagana Zulum noted that “we have seen a lot of progress in terms of security in the northeast, especially here in Borno State”.

He commended the two components of the military for their spirit of synergy which he said “has brought a lot of progress in the war against insurgency”.

Nigeria is currently facing increasing terrorism and criminal activities across the country especially in its northern fridges where insurgents, bandits and roving gangs have laid siege on communities.

The South-east has also seen bloody conflicts between the outlawed Independent Peoples of Biafra (IPOB) and security operatives. Kidnappers across the nation also regularly abduct citizens at will as security forces battle to maintain order.

This has led to criticisms against the Muhammadu Buhari government.

One of the three campaign points of Mr Buhari, a retired General, when he campaigned in 2015 was to curb insecurity. The other two were improved economy and war on corruption.

Mr Buhari, who will be completing his second and final tenure in 2023, has consistently said his government is doing all it can to end insecurity.