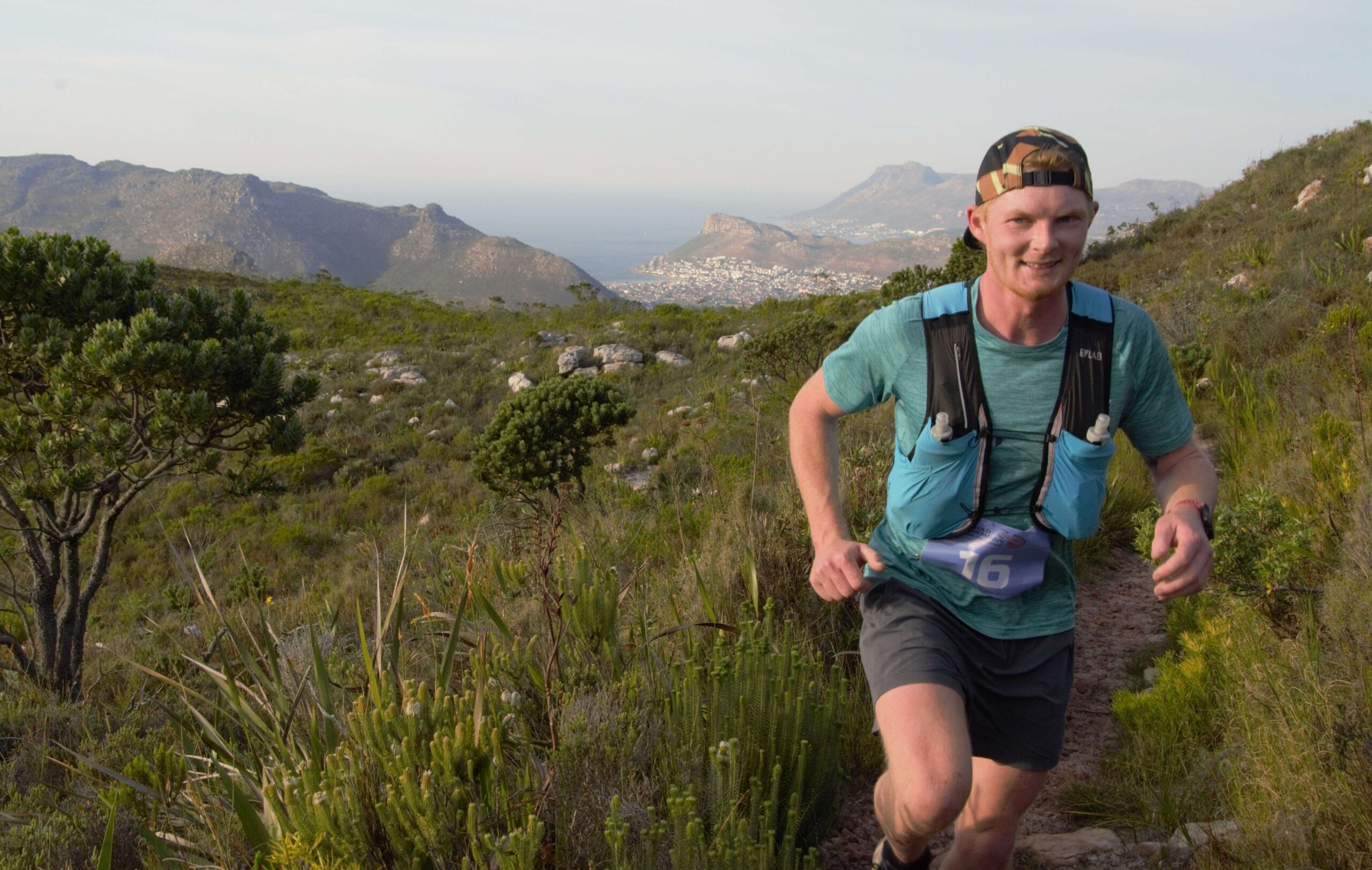 Kyle Bucklow continued his recent good form, racing to a convincing win in the 19th Old Fisherman’s Challenge, run over 24km between Fish Hoek and Hout Bay, while Lijan van Niekerk came from behind to snatch victory in the final 500m and retain her title in the women’s competition.

The race was run in warm, windy conditions, with Bucklow and Van Niekerk gaining first bite at the Triple Crown cherry, with Muizenberg Mountain Trail and Hout Bay Trail Challenge completing the competition over the next six weeks.

“It’s great to get a win,” said Bucklow. “I enjoyed the contest with Jarryd and let him take the running in the first half. I wanted to see how strong he was on the climbs, and felt he was struggling a bit on the Amphitheatre Trail just, after half-way. I used that to give me the confidence to take the lead on the jeep-track leading to the top of Blackburn Ravine.”

Van Niekerk left nothing out on the trail in her quest for victory. “Phew – my body feels broken!” she gasped at the finish. “Kristen was strong in the mountains, but I gained on her after half-way and knew the fast final kilometres would favour me.”

Both the men’s and women’s races produced exciting contests, with Jarryd Dunn and Kristen Heath taking out the pace from the start, both highly motivated to win. Neither of the talented pair had won the “Fishers” after a number of attempts.

Dunn came up against an unbeatable Kane Reilly in 2016 and 2017, placing second on both occasions, before finishing fourth last year behind Llewellyn Groenewald, Robbie Rorich and Bucklow. Heath found herself competing against world-class athlete Meg Mackenzie in 2019, where she finished runner-up.

Three kilometres into the race the athletes crested the saddle below Trappieskop and Dunn held a narrow lead over Bucklow with Oli Morris and Kelton Miller 100 metres back in third and fourth.

Just three seconds separated Van Niekerk from front runner Heath at the start of the climb up from Boyes Drive in Kalk Bay into Echo Valley, with well-known photographer Marzelle van der Merwe some way back in third, having exchanged her camera bag for her hydration pack for the day.

The pattern was unchanged as the athletes reached the aid station at the Silvermine Dam at half-way and a kilometre further on Dunn still looked in control, holding onto a narrow lead over Special Edition 25km winner, Bucklow along the Amphitheatre Trail. The leaders had opened a significant gap on their rivals, with Morris over two minutes behind Bucklow in third and Miller and Kyle Nortje together in fourth, a further six minutes down.

Heath was two minutes up on Van Niekerk, but less than two minutes separated positions two to four in a tight contest in the women’s competition. Van der Merwe had made up substantial ground and was just a minute behind Van Niekerk, with back-from-injury Lauren Granger also in contention, 45 seconds behind Van Der Merwe.

Bucklow made his move on the jeep track at the end of the Amphitheatre Trail, racing past Dunn and heading for the top of the challenging descent down Blackburn Ravine. Dunn was still fighting hard, however, and was just three seconds back at the start of Blackburn, but was unable to match his rival on the descent. Bucklow looked a winner, holding a minute advantage through East Fort and onto Chapman’s Peak Drive.

Bucklow’s pace remained constant as he hit the beach, turning up the Hout Bay River Trail to cross the line at the new finish at the Hout Bay Riding Centre in 2 hrs 12 min 09 sec, winning by 2 min 49 sec.  Dunn grabbed his third runners’ up position at the Fishers in 2:14:58, with Morris running strongly to complete the podium in 2:16:58.

Meanwhile Heath had maintained her lead over Van Niekerk approaching the top of Blackburn, but Van der Merwe had moved into second, just 1:21 behind. Granger was in 4th just behind Van Niekerk, but the latter showed her skills on the descent, regaining second position, 1:29 behind Heath through East Fort.