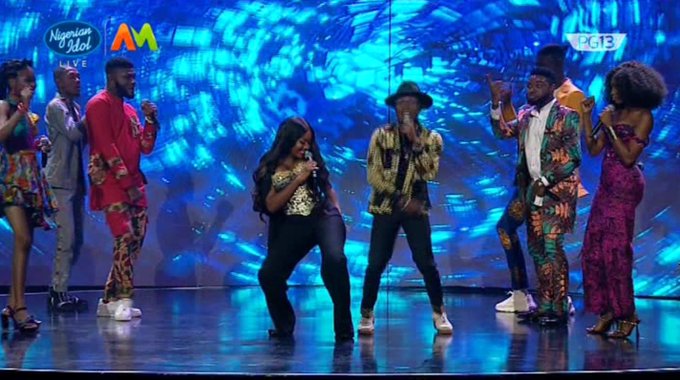 As the Nigerian Idol season 7 eviction continues, Kingdom Kroseide, who made Seyi Shay cry due to his spectacular performance during the last season of the show, was featured as a guest artiste.

Akunna who emerged as one of the top three finalists in the Nigerian Idol Season 6, was also a guest singer. They both performed with the Top 7 contestants.

Kingdom has since gone on to perform at several concerts, including one with Omawumi at her album listening concert.

He recently released the single ‘Shey You Go Dey,’ which has been dominating the country’s airwaves.

Akunna, since she emerged as the second runner-up, has gone on to open an entertainment law firm to combine her passion with her profession. She’s also started hosting events.

Akunna and Kingdom, thrilled the audience as they performed “Oliver twist” by D’banj. They also performed together at the end of today’s show.

It was the end of the road for David Operah who was evicted after he failed to get enough votes to make it to the top six.