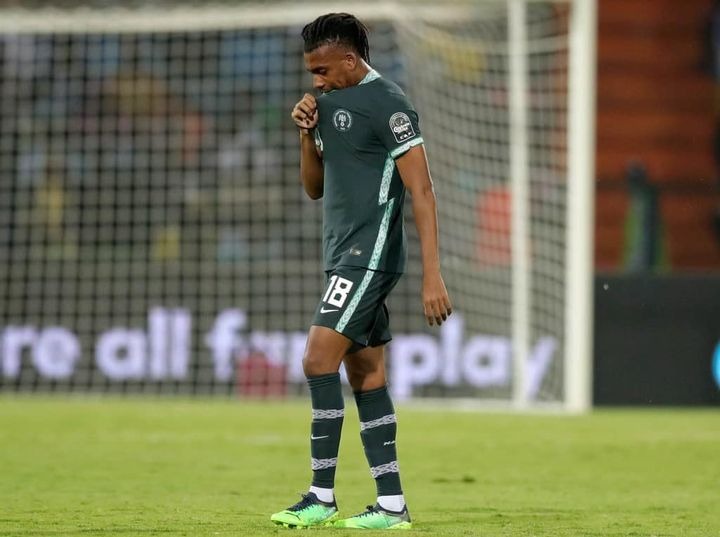 Amidst fans’ trolling and even threats in some quarters, Super Eagles midfielder Alex Iwobi has ended his silence on Nigeria’s ouster and his own nightmare outing at the ongoing Africa Cup of Nations in Cameroon.

Iwobi and Super Eagles goalkeeper Maduka Okoye were singled out by many as scapegoats after Sunday’s 1-0 defeat to Tunisia which ended Nigeria’s quest for a fourth Afcon title.

Iwobi was sent off for a foul after just six minutes on the pitch for what was deemed to be a dangerous tackle.

The former Arsenal star was brought into the game in the 59th minute for Kelechi Iheanacho to help change the complexity of the game, but his sending off further piled pressure as the Eagles failed to get back into the game.

In an emotional post on his Instagram page on Tuesday, Iwobi lamented Nigeria’s short-lived joy after starting so well, winning all group stage games.

Iwobi however assured that the good times will soon be back and this present disappointment would be wiped off.

He wrote: “Moments Of Joy Can Quickly Turn Into Pain And Anguish. As Much As It’s A Part Of Football, We Came For More…

“Our Fans Who Shared These Moments With Us Both In Cameroon And Across The World Deserved More!

“The Beauty Of The Game Is The Next Moment Of Jubilation Is Never Too Far Round The Corner. We, Will, Be Back To Fight For Our Nation, Stronger.

“We Owe It To You, And I Owe It To Myself. Thank You For All The Words Of Support & Encouragement – It Doesn’t Go Unnoticed”

Unfortunately for Iwobi, his red card against Tunisia has knocked him out of the crucial double-header against Ghana in the World Cup playoffs.

He would need to double his efforts to help his English team, Everton, from dropping down into relegation.