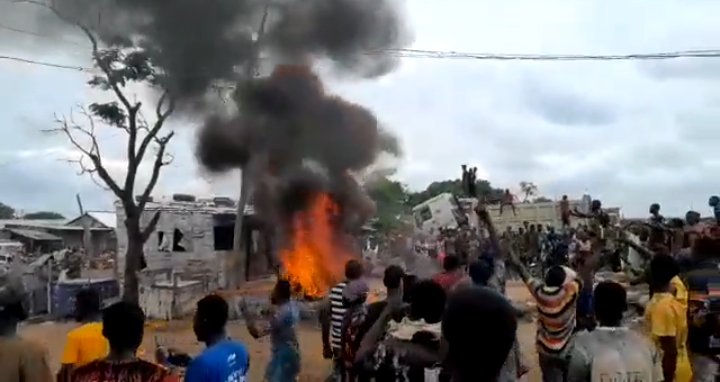 The Nigeria Police Force Federal Capital Territory Command has said that it is investigating the blasphemous killing that occurred on Saturday in the Lugbe area of Abuja.

A mob of over a hundred persons killed and burnt a 30-year-old member of a local vigilante group,
causing panic and pandemonium in the area.

The mob action took place around 1pm on Saturday after Usman sought refuge in the vigilante office in the market.

Findings show that the local security outfit was overpowered before Usman was killed in front of the office and set ablaze.

“The guy is known as Small Hundaru, that was not his first time of insulting the prophet before the action was taken,” said a trader at the market.

“He was caught after buying food in the market in the afternoon, because when the blasphemy occurred it was just few people who were there, then a stick was used to hit him in the head. Though he had a gun with him, it was retrieved before the beating.

“Thereafter, he was stoned before he ran to the office. His colleagues at the office were aware but they couldn’t shield him due to the number of people that chased him. After he was unconscious, petrol was poured over him and not to stoke any fear in the market, he was burnt in front of the office.”

The Commissioner of Police, Babaji Sunday warned against the indiscriminate resort to jungle justice.

He said, “We’re outrightly against jungle justice. The law is against, and adequate sanctions will be meted on subscribers of this crude and dastardly act.”

Your Friends Also Read:  Zuma to Address the Nation as ConCourt Considers Appeal