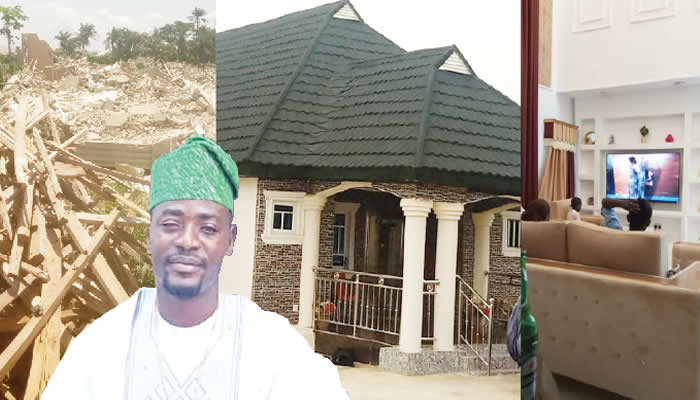 Akinkunmi Olapade, a landlord and resident of the Oke-Ira community in Ikorodu where over 200 houses were demolished, speaks to EMMANUEL OJO about his loss

Can you briefly introduce yourself?

My name is Akinkunmi Olapade. I am a resident of Oke-Ira community in Igbogbo Bayeku Local Government Area of Ikorodu, Lagos State.

Were you affected by the recent mass demolition of buildings by the Lagos State Government in your area?

How did it happen?

She went into shock on hearing the news about the demolition. She was rushed to the hospital but she eventually died. She previously had an underlying ailment of high blood pressure; the news of the demolition aggravated her condition, leading to her death.

She acquired a property in the area, which I helped her to buy. She didn’t even want her husband to know about it. She acquired the property for her children because she suspected that her husband has children elsewhere. Just in case they take her husband’s property away from her, at least she would have secured something for the children. It was a plan for the future.

How long ago did she acquire the property?

Was it just a bare land that she had there or she erected a building on it?

She has a completed building erected there. A two-bedroom flat and two mini flats.

Was the land properly acquired? Did she follow due process and have a Certificate of Occupancy?

She didn’t have a Certificate of Occupancy. She bought it from the family of Oke-Ira. She got the family receipt.

There’s a report that the place is owned by Lagos State. Did you know about that?

No. What I know is that the place has been fenced by a company called Nichemtex Cooperative that bought land there. When Igbogbo people took them to court, they (Igbogbo people) won. The case Igbogbo people made with them was that the people that sold land to them (Nichemtex) were not the bona fide owners of that land. The people that sold the land to the company (Nichemtex)  are Oniri Ajibode family. Now, the Oke-Ira family, which is Ogunbiyi, is under Igbogbo kingdom. The King of Igbogbo took them to court and won; they appealed, they still lost. That was the reason why everyone started buying land from this family.

The acre of land the company bought, this family didn’t touch it but the company went as far as collecting the Certificate of Ownership for a vast chunk of land. They were not specific about the boundaries of the land they bought.

What’s the worth of the property already erected there by your sister?

Inclusive of the property inside, everything is worth over N25m.

How did she receive the news?

When my elder sister heard that they demolished my house, she put a call through to this my other sister that died of shock, trying to know if her house was also demolished. My late sister made some calls and found out that her own house was also demolished. That was how she went into shock and eventually died at the hospital. She has been buried according to Islamic rites. It was confirmed that she died of shock.

How old was she?

I’m not sure of her exact age now. I might have to reconfirm from my mom but she is well over 50. She was survived by her husband, three children and some grandchildren.

Were you served any form of notice by the state government before the demolition?

No notice. The only paper that was served on us last year was by the Lagos State Building Control Agency; and that was paper for the plan. Meanwhile, the family that owns that land wrote a petition against them because it was a scheme by the company that bought that land and they wanted to achieve that through LASBCA.

Was the demolition done by the company or by the Lagos State Government?

It was by the Lagos State Government because the demolition team came with the Lagos State Physical Town Planning, Nigerian Police Force’s mobile policemen, some fully-armed soldiers and hoodlums.

I was working at Ajah. I came back by ferry when I was informed of what was going on. When I got back, they had already demolished my house.

What is the worth of your own property?

I lost property worth of over N30m.

Did you live there or you placed it on rent?

I was living there with my wife, three children and aged mother.

Where do you live now?

Presently, as I’m talking to you, one of my friends who has a hotel gave me a room after he learnt that I was sleeping inside an abandoned vehicle. He gave me a room to use for one week, so that I can put myself together to rent an apartment. My family is with my wife’s friend. My mother had to go to my sister’s place.

Were you able to recover your properties?

We don’t have anything again. Clothes, all the interiors in the house, even the gold I bought in Kano six years ago. It was worth N425,000 then. The last time I checked the value, it was worth over N1m. Our wedding ring, jewellery, everything gone!

Were the properties stolen by the hoodlums before demolition?

No. After the demolition, they went in to scavenge for properties and valuable items.

How are you coping with all of these?

Life has been hell. You know what it means when you had a home and you don’t have anymore, family scattered. Since the whole family scattered, my last daughter has not been sleeping. I have to call every night and talk her to sleep.

Usually, they come to my room when I get back from work and she sleeps on my chest, then I take her to her room and roll her into her bed. Whenever I’m not home, she doesn’t sleep.

I can’t even afford an apartment for my family and my old mother at the moment.