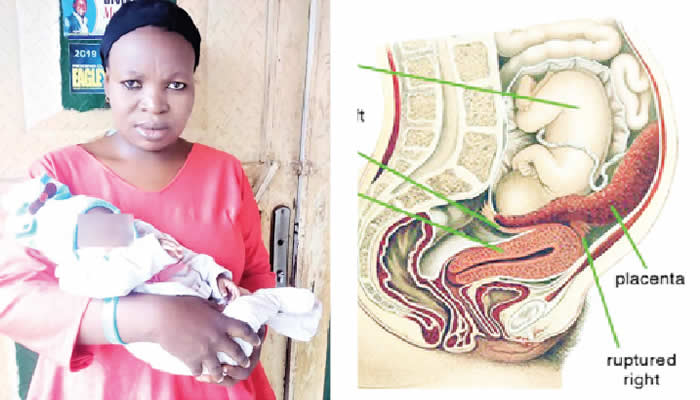 Ectopic pregnancies – pregnancies that occur outside the womb can be fatal for a pregnant woman and her baby. This is because foetus (baby) rarely survives longer than a few weeks outside the womb. A rare form of this pregnancy complication is abdominal ectopic pregnancy – one of the leading causes of maternal mortality and morbidity in the first trimester of pregnancy. However, Mrs. Veronica Musa, a 36-year-old woman who carried an abdominal ectopic pregnancy to term without knowing, shares the extraordinary story of how she achieved the rare feat. OLUWATOBILOBA JAIYEOLA reports:

Veronica Musa’s face was a canvas of joy when the doctor told her she was pregnant. But for the firm hands of her husband, she would have turned the office into a dancing hall. It was her first pregnancy after two years of marriage.

“I was elated because I was well into my thirties and the pregnancy was a confirmation of my faith. I had prayed and trusted God, and when I saw the result, I broke out in joy,” she said.

Little did she know that it would be a journey filled with pains and confusion. It started with tummy pangs a couple of weeks into the pregnancy. At first, she thought it was the occasional discomfort associated with pregnancies.

But when the pain persisted, she went for medical clarification, which began her endless hospital visits and relentless fear that something could go wrong.

Veronica, however, noted that despite her worries that something was not right, she never knew that the baby was not growing in her womb all through her 37 weeks of pregnancy.

“I never knew that the baby was growing inside my stomach and not in the womb,” she said.

At the first scan clinic she visited, she was told that her womb was empty and there was no baby inside, instead they said she had multiple fibroids.

This deflated her joy, but she remained resolute with her faith that she was pregnant.

With advice from doctors to go for further tests, she said that she visited about five more hospitals, adding that all the hospitals confirmed that she was actually pregnant. She noted that while this gladdens her heart, she was worried because she was always in pain.

Sharing her experience with PUNCH Healthwise, Veronica who hails from Edo State, said, “During the course of the pregnancy, I was always having stomach pains.

“For some days, I would not be able to walk or stand straight. I was always going to the hospital and, the doctor would always treat me for malaria.

“However, when my complaints persisted and I was not getting better, the doctor asked me to go for a scan.

“So we went for a scan. The first place I went to, they said I was not pregnant. The doctor said he was not seeing any pregnancy but rather multiple fibroids in the womb.

“So, I went back to the hospital and the doctor asked me to go for another pregnancy test which I did. It was positive this time.

“He later referred me to another scan centre for examination. I went there and the doctor said there was a baby in my womb, but also confirmed that I had multiple fibroids.

According to Veronica, there was nothing special about her pregnancy, adding that she did not even have special cravings like some pregnant women used to talk about.

She, however, noted that her husband was very supportive during her pregnancy.

She said, “He was very caring and supportive during this period. He has always been supportive, but during that period, he was extra supportive and caring. I also got the support of our family.”

According to experts, a fibroid can block the opening of the uterus, or keep a baby from passing into the birth canal.

Veronica said this was what happened in her case.

She disclosed that even though she did not know she was carrying an abdominal ectopic pregnancy, the doctors had mentally prepared her for a caesarean session delivery because of the fibroid.

Veronica said, “The doctor told me that I won’t be able to give birth on my own, through my vagina and that we would have to do CS because the fibroid is blocking where the baby is supposed to pass through not knowing that the baby was not even inside the womb.”

According to her, the doctors couldn’t find a way to alleviate her pain.

The pain, she said, was the elephant in the room, adding that it was constant in the lower part of her tummy.

She disclosed that it was only on the day of her delivery that doctors found out she was carrying an abdominal ectopic pregnancy.

She said, “On the day of the delivery, April 20, 2022, we were in the theatre. The doctor, a consultant-specialist from another hospital, opened my womb and did not see any baby there.

To continue reading this story, go to: https://healthwise.punchng.com/