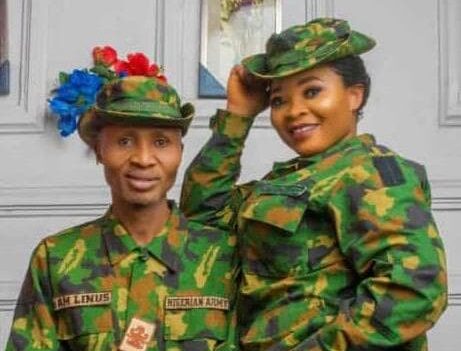 The victims, A. M. Linus, said to be a Sergeant of the Nigerian Army, and his unidentified wife, said to be a lance corporal in the Army, were reportedly beheaded after being shot dead by the gunmen.

Their corpses were said to have been dismembered by the gunmen. A gory image of their heads has gone viral on various social media platforms.

A phone conversation with the suspected gunmen, believed to have been initiated by a friend to the slain female soldier, has surfaced online.

In the phone conversation, obtained by PREMIUM TIMES, a suspected gunman admitted that he killed the couple.

The gunman said they were aggrieved that the military has been consistently killing innocent residents in efforts to attack them (gunmen).

“It’s quite unfortunate that it is this way. I killed both of them yesterday,” the suspected gunman was heard saying in the phone conversation.

As the caller burst into tears after hearing that her friend and her husband had been killed by the gunmen, the gunman was heard making a joke of her.

Confirming the attack, Army spokesperson, Onyema Nwachukwu told PREMIUM TIMES, Monday, that military authorities have received information about the killing of two of their personnel.

Mr Nwachukwu said the military personnel were travelling for their “traditional marriage formalities” in Imo State when they were attacked by the gunmen.

“This is a very dastardly act unleashed on our personnel by some criminals,” he said in a text message in response to PREMIUM TIMES’ enquiry on the incident.

The army spokesperson said authorities of the Nigerian Army had commenced investigations “to unmask and bring to book the criminals behind the murder.”

Attacks by gunmen have increased in the South-east in recent times. The attacks often target security agencies and government facilities.

The Nigerian government has accused the outlawed Indigenous People of Biafra (IPOB) of being responsible for the deadly attacks in the South-east. But the group has repeatedly denied their involvement in the attacks.

The separatist group is leading the agitation for an independent state of Biafra to be carved out from the South-east and some parts of the South-south Nigeria.

The leader of the secessionist group, Nnamdi Kanu, is currently detained in Abuja where he is facing trial for alleged treason.