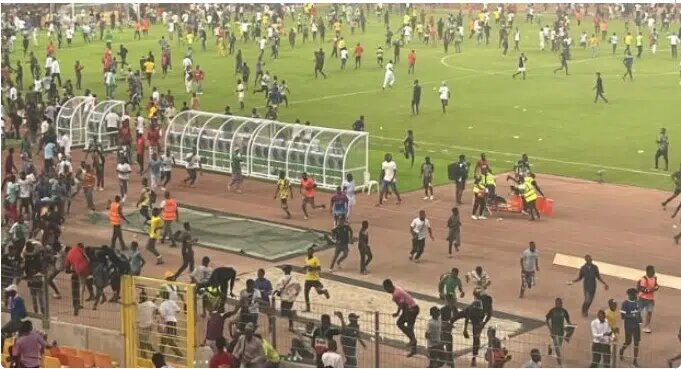 FIFA on Monday announced a fine of CHF150,000 (about N64 million) for the Nigeria Football Federation; adding that the country’s national team must also play their next home game behind closed doors.

The Super Eagles after holding the Black Stars to a barren draw in Kumasi in the first leg of their playoff tie needed to win the second leg at home to seal their place at the 2022 World Cup in Qatar.

But the Eagles could only squeeze out a 1-1 draw against their fierce rivals, dashing their hopes of qualifying for the World Cup for the seventh time in front of the record home crowd.

This development did not go down well with the fans who vented their anger by throwing objects into the pitch before invading and destroying everything within sight.

As a result, the disciplinary arm of FIFA on Monday released a statement where the breaches committed by Nigeria and some other countries were highlighted and the punishments also spelled out.

For Nigeria, FIFA cited a breach of Article 16 of its Disciplinary Code on Order and Security at match venues.

“Order and security at matches (failure to implement existing safety rules and failure to ensure that law and order are maintained in the stadium, invasion of the field of play, and throwing of objects).

With the pronouncement that the next Super Eagles game should be played behind closed doors, it means the AFCON 2023 qualifiers against Sierra Leone will take place without fans in June.