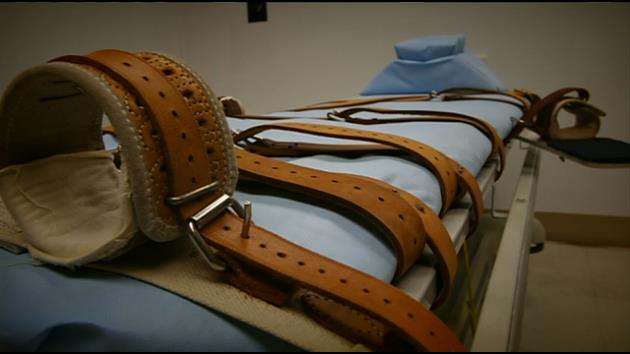 OKLAHOMA CITY (AP) — A federal judge in Oklahoma on Monday ruled the state’s three-drug lethal injection method is constitutional, paving the way for the state to request execution dates for more than two dozen death row inmates who were plaintiffs in the case.

Judge Stephen Friot’s ruling followed a six-day federal trial earlier this year in which attorneys for 28 death row inmates argued the first of the three drugs, midazolam, is not adequate to render an inmate unable to feel pain and creates a risk of severe pain and suffering that violates the U.S. Constitution’s Eighth Amendment prohibiting cruel and unusual punishment.

“The prerequisites of a successful lethal injection challenge under the Eighth Amendment have been made clear by the Supreme Court,” Friot wrote, citing three earlier rulings on the death penalty.

He continued: “The plaintiff inmates have fallen well short of clearing the bar set by the Supreme Court.”

Jennifer Moreno, one of the attorneys for the death row inmates, said they are still assessing their options for an appeal of the judge’s ruling to the 10th U.S. Circuit Court of Appeals in Denver.

“The district court’s decision ignores the overwhelming evidence presented at trial that Oklahoma’s execution protocol, both as written and as implemented, creates an unacceptable risk that prisoners will experience severe pain and suffering,” Moreno said in a statement.

Oklahoma Attorney General John O’Connor’s office did not immediately respond to a request for comment.

During the trial, each side presented experts in anesthesiology and pharmacology who offered differing opinions on the effectiveness of midazolam in rendering an inmate unable to feel pain.

James Stronski, an attorney for the inmates, told Friot that if inmates aren’t properly anaesthetized, they would be paralyzed and unable to move or speak after the second drug is administered and then feel excruciating pain as the final drug, potassium chloride is injected to stop the heart.

“If this is allowed to continue … this is a 21st century burning at the stake,” Stronski told the judge.

Attorneys for the state rejected that argument and maintained that a 500-milligram dose of the drug was more than enough to ensure that inmates are unable to feel pain.

The state has carried out four lethal injections since October that Oklahoma’s former Solicitor General Mithun Mansinghani said during closing arguments “are definitive proof that the protocol works as intended.”

Oklahoma resumed lethal injections in October with the execution of John Grant, who convulsed on the gurney and vomited before being declared dead. Since then, three more executions were carried out without noticeable complications.

Oklahoma had one of the nation’s busiest death chambers until problems in 2014 and 2015 led to a de facto moratorium. Richard Glossip was just hours away from being executed in September 2015 when prison officials realized they received the wrong lethal drug. It was later learned the same wrong drug had been used to execute an inmate in January 2015.

The drug mix-ups followed a botched execution in April 2014 in which inmate Clayton Lockett struggled on a gurney before dying 43 minutes into his lethal injection — and after the state’s prisons chief ordered executioners to stop.