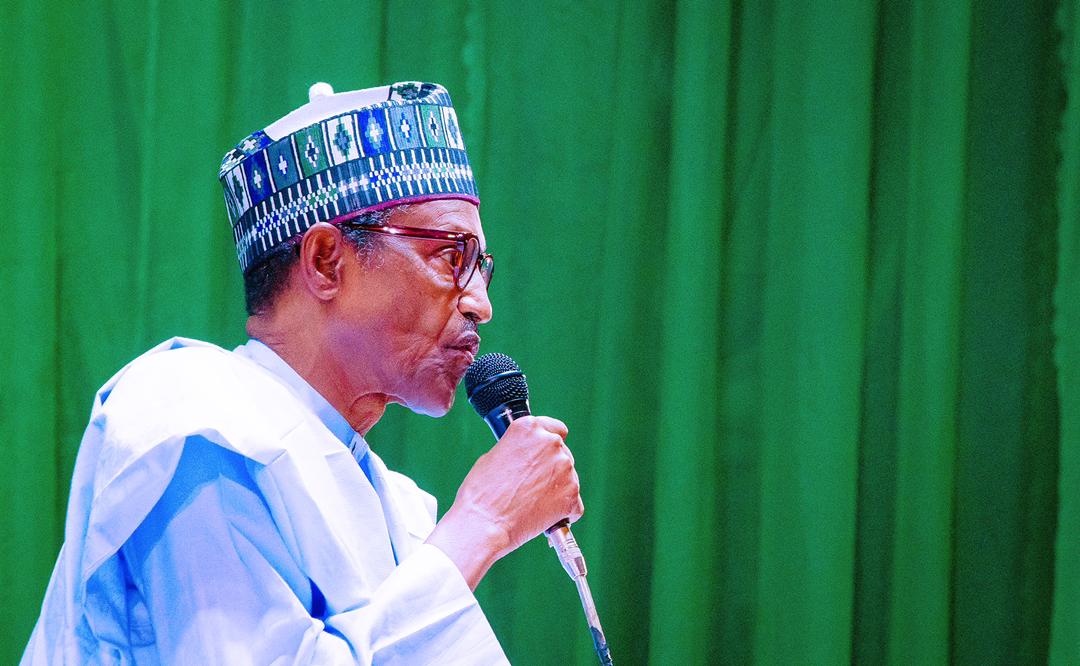 President Muhammadu Buhari has urged presidential aspirants of the ruling party, APC, to work towards producing a consensus and ‘formidable candidate.’

Mr Buhari stated this at a Saturday night meeting with the 23 presidential aspirants of the party at the State House, Abuja.

The meeting was held behind closed doors and its details were sent to PREMIUM TIMES by Femi Adesina, the president’s spokesperson.

“Similarly, I wish to remind you that our choice of flag bearer must be formidable, appealing to the electorate across the board and should command such ability to unify the country and capacity to address our critical challenges,” Mr Buhari was quoted as telling the aspirants.

The chairperson of the APC screening committee, John Odigie-Oyegun, had told journalists Friday that all the APC presidential aspirants, except one, were open to the option of a consensus candidate.

He did not name the outlier but quoted the aspirant as saying he would only accept a consensus if he is the choice.

Earlier on Saturday, APC governors from Northern Nigeria met and declared their support for the presidential ticket of the party to be zoned to the South.

President Muhammadu Buhari Saturday night met with all the aspirants for President on the platform of All Progressives Congress, at State House, Abuja, urging them to hold consultations, and come up with a formidable candidate before the party holds its primary election between June 6-8, 2022.

The President said the meeting was a continuation of the on-going consultative process aimed at ensuring a smooth and strategic emergence of a standard bearer, who will lead the APC to a resounding victory in the upcoming presidential polls.

“Looking at this assemblage of personalities and considering your rich pedigree of accomplishments in life, I have come to the conclusion that our party, the APC, is rich in human resources and also that our nation is blessed with capable people that can successfully steer the ship of state into the future,” President Buhari said.

He added that with his first-hand knowledge of the demands of the office of the President of the Federal Republic of Nigeria and the expectations of the citizens, “I must salute your courage and your selfless spirit, in volunteering to serve in the highest office of the land.”

The President added: “Our party, the APC, has won two successive presidential elections in 2015, first when we were in the opposition and in 2019 when I sought re-election. Both processes were achieved through unity of purpose, strategic alignment, consultation, fairness, determination and effective leadership. In both instances, national and party interests were overriding factors in our deliberations and decision-making.

“The 2023 General Elections are fast approaching in a global, regional and national environment that is constantly changing and challenging. This demands that our party should become more aware of the changing environment, be responsive to the yearnings of our citizens, re-evaluate our strategy and strengthen our internal mechanism so that we would sustain the electoral successes.

“I am pleased to note that the party, recognizing the significance of all these demands, has over time developed several democratically acceptable processes and policies, that promote consultation, internal cohesion and leadership to facilitate victories at the polls.”

The President recalled the consultation he had held with stakeholders “that would help the electoral fortunes of our party, beginning with the State Governors. This is the second in the series and I still look forward to meeting with party stakeholders. These steps are being taken to ensure that the unity and cohesion of the party are sustained and to provide direction.

“Amongst others things, I reminded the APC Governors of the need for the party to proceed to the 2023 Presidential elections with strength, unity of purpose and to present a flag bearer who will give Nigerians a sense of hope and confidence, while ensuring victory for our party. I extend a similar reminder to all of you distinguished aspirants.”

Saying the APC will on Monday June 6, 2022 commence its national convention during which one candidate will be picked by delegates to fly the flag of the party for the 2023 Presidential Election, President Buhari said he was aware that there is anxiety among party members about the outcome of the process.

“Given these circumstances, I charge you to recognize the importance of the stability and unity of the party, which cannot be overemphasized.

“Similarly, I wish to remind you that our choice of flag bearer must be formidable, appealing to the electorate across the board and should command such ability to unify the country and capacity to address our critical challenges.

“Ahead of the Convention, the party machinery has screened and found all aspirants eminently qualified. Recognizing this fact, the Screening Committee has, amongst others, recommended that consensus building through consultation, be intensified.

“Without prejudice to your qualifications, I urge all of you to hold consultations amongst yourselves and with the party, with a view to building a consensus in a manner that would help the party reduce the number of aspirants, bring up a formidable candidate and scale down the anxiety of party members.”

The President assured that in the interest of the nation and the party, he would continue to provide effective leadership during the transition processes and on-going consultations, “until we successfully make the choice on the candidate that will fly the flag of our party for the presidential elections and make the party stronger. I seek your support in this all important responsibility.”

Earlier, National Chairman of the party, Senator Abdullahi Adamu had promised that all stakeholders of the party would be reached in the consultation process.

Responding on behalf of the aspirants, former Governor of old Abia State and immediate past Minister of Science, Technology and Innovation, Dr Ogbonnaya Onu, Governor Abubakar Badaru of Jigawa State, and Vice President, ‘Yemi Osinbajo, thanked the President for his leadership and guidance, pledging that they would hold the consultations as counseled “for the unity and strength of our party, the APC.”