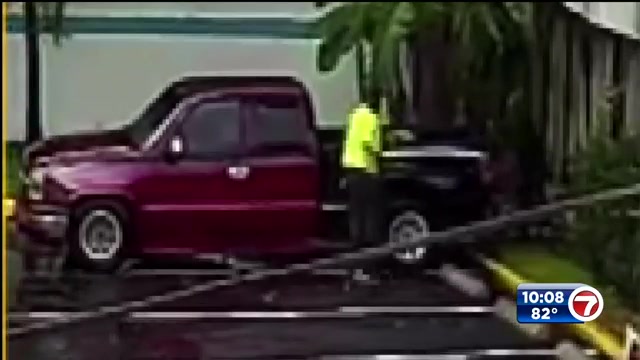 OAKLAND PARK, FLA. (WSVN) – A U.S. Army veteran said two thieves broke into his storage container in Oakland Park and took off with thousands of dollars in equipment he uses to make a living.

Speaking with 7News on Sunday, George Giraldo said his welding business has been shut down because of the break-in.

Giraldo said the pair stole nearly $10,000 worth of his essential equipment.

Giraldo, who served nearly a decade in the Army, said the high priced heist happened Friday between 4 p.m. and 5 p.m. behind a Burger King off Oakland Park Boulevard.

Giraldo said the men broke in through the back by cutting a fence that he has since fixed.

The victim said the crooks pried open the back of his storage container, and from there, they went to work.

“When they saw what was in here, they came to the front, ripped it open, came in and took it,” he said.

After that, nearby surveillance cameras captured the subjects as they climbed over the fence with the equipment and loaded it in the back of a two-toned color pickup truck. They were seen driving away moments later.

“It’s a red Silverado with a black bed liner, and goodness gracious, there ain’t too many of them riding around,” he said. “If you see one, call it in.”

That’s exactly why Giraldo is sharing his story, so he is able to get back to work and hopefully prevent these thieves from striking again.

“I want them not to do this to somebody else, ’cause they’re obviously – I’m not their first person, and I’m probably not going to be their last, unless we find them,” he said.

Giraldo has parked his white pickup truck in front of the container to prevent further break-ins.

If you have any information on this theft or the subjects’ whereabouts, call Broward County Crime Stoppers at 954-493-TIPS. Remember, you can always remain anonymous, and you may be eligible for a reward of up to $5,000.

Copyright 2022 Sunbeam Television Corp. All rights reserved. This material may not be published, broadcast, rewritten or redistributed.