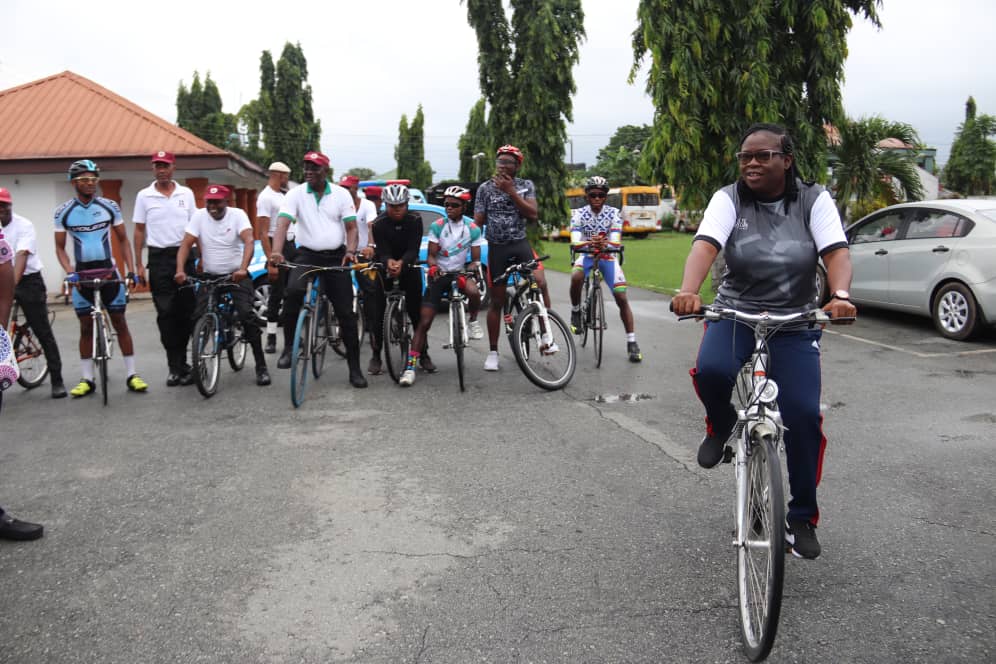 As the globe marked World Bicycling Day, the Matron of the Cycling Federation of Nigeria and First Lady of Abia State, Dr. Mrs. Nkechi Ikpeazu, has called on Nigerians to adopt cycling as a safe means of transport that has health benefits for the rider and does not cause pollution.​

Speaking at a cycling rally organised by the Federal Road Safety Corps in Umuahia to mark World Bicycle Day, Mrs Ikpeazu revealed that she had been riding bicycles since she was six years old and could attest to its numerous gains for the body including stamina and cardiovascular benefits.​

She commended the Federal Road Safety Corps for promoting bicycle riding as a means of mass transit as it would also reduce road traffic accidents if well organised.

Mrs Ikpeazu, while demonstrating the importance and health benefits of cycling by riding a bicycle, urged government at all levels and civil society organisations to senstise the public on the benefits of cycling adding that it would reduce many kinds of sicknesses.

Also speaking, the​ Sector Commander of the FRSC, Mr. Paul Ugwu, said that the world cycling day is a day set aside to promote the use of bicycle as alternative means of transportation thereby helping to reduce the extent of crashes on the road, and reducing carbon emissions.​

He said the FRSC embarked on the cycling demonstration rally through the streets of the city in collaboration with Mrs Nkechi Ikpeazu because as the First Lady of Abia, she had shown tremendous interest in promoting cycling, safety, and health of Abia residents.​

Ugwu called for government at all levels to fully integrate bicycle lanes in all road construction and enforce the compliance so that other road users and vehicles would give right of way to people on bicycles.​

In his remarks, the Eastern Zonal Coordinator,​ Cycling Association of Nigeria, Dr Ezebunwa Ubani, said that the world cycling day was an important event that should be taken seriously to promote physical fitness and to reduce emissions in the society.​

He commended the wife of Abia Governor for her immense support to cycling federation, sponsoring several bicycle rallies and local competitions, which had earned​ her an award as the matron of the national association of cycling federation in the country.