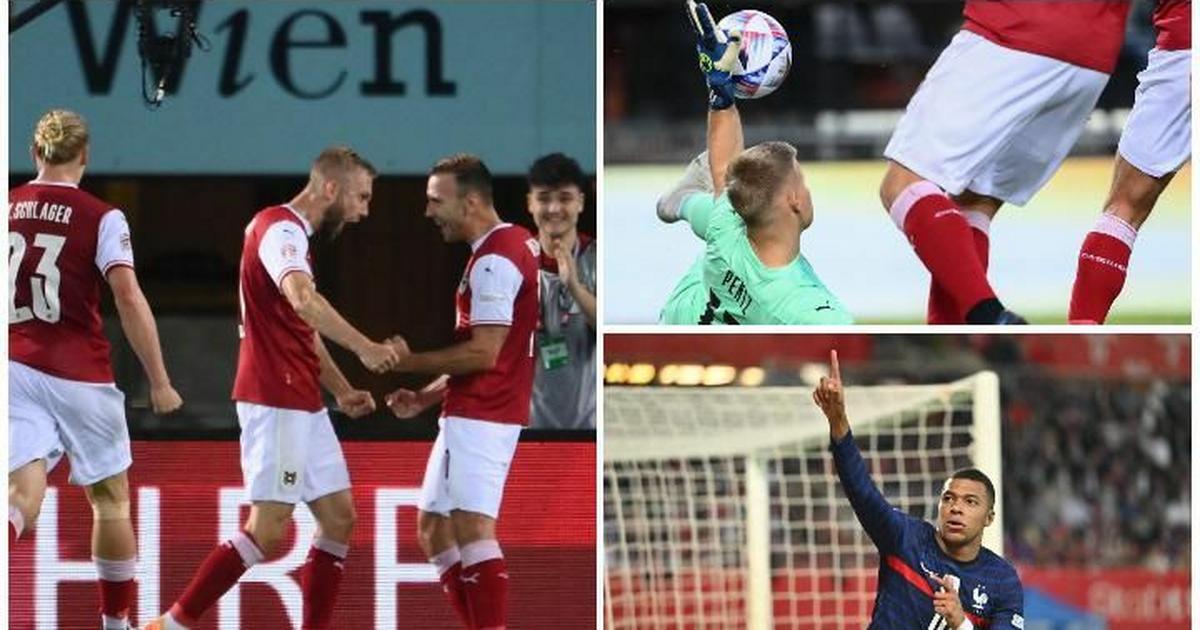 Austria was denied all three points after France held them to a 1-1 draw at Ernst-Happel Stadion in Wien on Friday night.

Paris Saint-Germain talisman Kylian Mbap came off the bench to be the saviour for France after netting the all-important equaliser late on.

Andreas Wiemann tapped in the opener t put Austria ahead in the first half, but France finally found a way seven minutes from time thanks to super-sub, Mbappe, who came on to ensure both nations shared the spoils in the end.

Now, let’s take a look at four (4) of the best moments from the game.

– Alaba and Benzema catch up before kickoff

After a brilliant season with Real Madrid, David Alaba and Karim Benzema had a lovely moment just before the game between their countries kicked off.

– Pentz pulls off a double-save to deny Karim Benzema

France was the dominant side on the night and could have taken an early lead in the second quarter of the game but for some brilliant goalkeeping from Pentz.

The 25-year-old showed signs of what to expect when he denied Benzema in the 19th minute with an excellent double-save en route making a total of six saves against France tonight.

A very good Antoine Griezmann free-kick eluded everyone and gave Pentz problems but he parried the ball into Benzema’s path and the Real Madrid star headed it back towards goal with the goalkeeper still on the floor but he reacted superbly to flick it to safety again.

– Wiemann strikes to put Austria ahead

Minutes after Pentz superbly stopped Benzema, Austria found themselves in front against the run of play thanks to a devastating counter-attack led by former West Ham star, Marko Arnautovic.

Arnautovic dribbled his way into the box and picks out Konrad Laimer, who overlaps before sending a lovely cross for an easy tap-in for Wiemann, his first international goal for Austria.

– Mbappe comes on to save France

France continued their dominance on the ball in the second 45 minutes but the equaliser remained elusive.

However, the goal finally arrived 20 minutes after Mbappe was introduced by Didier Deschamps and the PSG man saved the day for the French with seven minutes to go.

The trio of Konate, Nkunku and Mbappe combined to great effect, with the latter duo playing an intricate one-two which set up Mbappe clear and he made no mistakes from 12 yards out to level the scores.

The goal means Mbappe has now been involved in five goals (3 goals, 2 assists) in his last five matches off the bench for France. He has also now scored 10 goals in the last seven international matches.

Pentz pulls off another superb save late on

Mbappe almost completed the comeback win for France but Austria holds so much gratitude to their goalkeeper, Pentz, who once again came to their rescue with a super, super deflected save onto the bar to deny Mbappe with three minutes to play.

An outstanding individual performance from the goalkeeper earned Ralf Rangnick’s side a valuable point.

Man of the match: You don’t need to ask, Pentz takes it.